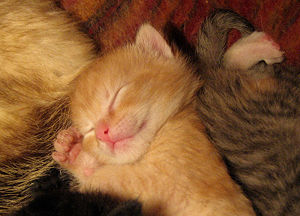 Kitten sleeping. Kittens are much more likely to be adopted than full-grown cats, but often fees are higher to adopt a kitten.

Cat adoption is the process of a person taking custody of a cat. It can happen informally when a neighbor's cat has kittens and puts them up for adoption, or more formally when visiting a humane society or shelter, choosing a cat, filling out paperwork, and taking a kitten or cat home. It involves a commitment to take responsible care of a pet. There have been instances when stray cats are taken in by their new families; one scientist explained that sometimes cats...:

Adopting from the humane society usually requires paying a fee, particularly for kittens, although a number of no-fee adoption programs have helped encourage adoptions, and lessen the need for euthanasia.[1] In Salt Lake City, Utah, a no-fee adoption program caused adoptions to increase from 702 in 2008 to 1,038 in 2009, and euthanizations have decreased from 2,356 to 2,778.[1] In instances, the no-fee adoption policy applies to adult cats, who are less likely to find caretakers.[1]

During summers, cat shelters tend to "overflow", spurring a movement to lower fees or drop them altogether.[2] A Michigan shelter promoted adoptions with a free "multipoint inspection" including spray/neuter surgery, vaccinations, behavioral evaluations and grooming.[2] The campaign called for adopting "Certified Pre-Owned Cats" touting "no money down, no financing and no payments."[2] During the recession, perhaps because people had fewer resources to care for cats, the numbers of cats in shelters was higher. At a center in North Carolina, the numbers of pets at a shelter was 825 compared with 700 for a similar period for the previous year.[2] Kittens get adopted quickly.[2] A study by the American Association for the Prevention of Cruelty to Animals suggested there were no substantive differences between adopting persons who paid a fee, or who didn't pay a fee.[2] In New Jersey, a creative promotion campaign suggested that people adopt a "black cat" around Halloween.[3] 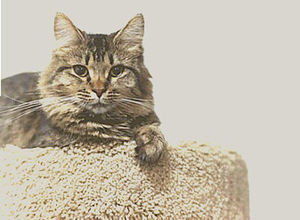 Persons who adopt cats typically give them names; this cat's adopter named the cat Rhonda.

In most instances, adopting a cat involves filling out paperwork so that volunteers can get more insight into whether a person or family would make a responsible pet owner. Some adoption centers have downloadable application forms. Some centers provide a month's worth of pet insurance as an incentive for people to adopt.[4] In the United States, adoption usually means visiting a humane society, although there are some grass roots volunteer rescue groups that seek owners for cats.[5]

Many adoption centers are run by volunteers who work hard to prevent cruelty to cats, who rescue them and promote efforts to keep cats from starving or being neglected.[5]

The American Humane Association dubbed the month of June as "Adopt-A-Cat" month.[6] There was an unofficial estimate that there were more than 1,000,000 homeless cats in the United States.[6]

A shelter gave reasons for people to adopt cats:

On the downside, reasons not to adopt a cat, all of which apply to dogs except that dog allergy is rarer, include:

Some see a trend towards greater adoption of cats over dogs, since more households have both adults working, and there's nobody home during the day to look after a dog; in contrast, cats are easier to leave unattended for long stretches of the day.[7] Cats are independent-minded, and don't like to be put in groups like cattle; indeed, the phrase herding cats is an expression about how difficult it is to get intelligent people to all do the same thing.

By one account, the celebrity cat named "Morris the Cat" was about to be euthanized, but was rescued by a shelter worker who pitched the idea to a marketing person.[6] Since then, Morris has become the most recognized cat and has appeared on magazine covers, endless commercials and on national talk shows as a "spokescat."[6]

Many adoption centers try to evaluate whether humans would be good caregivers for a cat. But it's difficult to tell. A 35-year old dog groomer ran into trouble with animal welfare officers after she placed advertisements on the Internet for "gothic cats"; officers learned she had been piercing kittens on the neck and ears and putting jewelry on the cats.[8] A court case resulted, and the woman was found guilty of animal cruelty, despite the fact that defense lawyers had argued that parents allow their children to get piercings[8] and tattoos in some instances. Some controversies surround the issue of whether to declaw or not; it used to be a widely accepted practice, but recently there have been objections that declawing a cat has drawbacks and can trigger ethical issues.[9] Some animal protection advocates call declawing "barbaric" while the American Veterinary Medical Association has stopped short of disavowing it, particularly if declawing makes a cat more readily adoptable.[9]