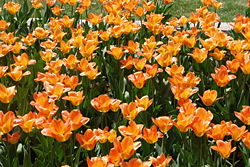 Some tulips found at Dow's Lake in 2006. Photo by Eric Bouliane

The Canadian Tulip Festival takes place every springtime in Ottawa Ontario. In 1945 Princess Juliana of the Netherlands made a gift of 100,000 tulip bulbs to Ottawa as a gesture of thanks for Canada's role in the liberation of the Netherlands. and for the shelter Ottawa provided when the Dutch royal family was forced to flee the Nazi invasion. By 1953 the annual flower displays made possible by this gift became an annual festival. As of 2008 the festival is the world's largest featuring over 3 million tulips and over 600,000 visitors.[1] The festival takes place over three weeks in May, ending with the Victoria Day weekend.

In May of 1940 The Netherlands were invaded. The Dutch royal family was evacuated to the United Kingdom. Queen Wilhelmina's daughter, Princess Juliana, and her two daughters went from there to Canada. They would spend the remainder of the war living at Stornoway, the official residence of Canada's leader of the opposition. Juliana gave birth to her third child in Ottawa. Juliana's rooms at Ottawa's Civic Hospital were temporarily declared Dutch territory for the occasion, so as to avoid any problems with the new daughters place in the line of succession.