CZ Talk:How to edit an article

Hi all! I am editing the article on Johann Sebastian Bach at the moment and I was wondering if there is a way to indicate that a citation or reference is needed for a certain claim or paragraph. I remember that something like this was possible in Wikipedia. Is there something like this on CZ, too? THanks, Matthias Röder 11:52, 9 August 2007 (CDT)

I personally find it a practice of disgust, and anything that requires a "citation needed" should be pulled from the article. It allows for fabrication, rumors, and hearsay.--Robert W King 12:04, 9 August 2007 (CDT)

I am not sure I understand what you mean. Sometimes a not so well-known statement or passage may be important to have for an article. In order for others to find out more about this statement a references or citation might be useful. If such a reference does not exist yet, and if I am currently not capable of providing such a citation, how can I make other editors aware of the fact that a citation is needed? Is there a CZ policy on this? Should I put a comment on the talk page? Matthias Röder 12:16, 9 August 2007 (CDT)

If a reference or a citation does not exist for a "not so well-known statement", then doesn't it seem like you can just about fabricate anything? For instance, I could say "Matthias Röder advocates the stomping of ants(citation needed)". I can't provide a reference for that, and it certainly could be a "no so well-known" fact about you despite it's truth or falsehood.

On Wikipedia, anything can be made up and slapped with a "Citation Needed" reference to ensure its inclusion, regardless of truth. --Robert W King 12:22, 9 August 2007 (CDT)

Let me give you a concrete example from Johann Sebastian Bach. The article states correctly: "The Art of Fugue, published posthumously but probably written years before Bach's death, is unfinished." I know that there are several articles by Bach scholars about this topic (among them Christoph Wolff) and I think it would be great to have those articles listed in a footnote for those readers who are interested in reading more about this. Since I cannot produce the citation myself at the moment (I'm travelling) I would like to bring this to the attention of other editors. Is there a shorthand that would produce a "reference to be added" flag into the text? Or is it better to indicate this in the talk page? All I want to know is whether there is a CZ policy for this situation? Matthias Röder 12:34, 9 August 2007 (CDT)

If I use <blockquote>I shall return.<ref>xxx</ref></blockquote> to insert a direct quote, do I need to include double quotation marks, as

Editing tools in a wiki that help semi automate markup

Special characters and markup available for insertion in editing screen if clicked.

I've gone through this to simplify it a bit, remembering that this is mainly to help get people going. Some bits I've commented out (the dates section) - I don't think we want this, but others may disagree. I think we want to keep this page quite concise though and focussed on the most important things - too much is intimidating to newcomers.Gareth Leng 09:18, 2 February 2009 (UTC)

Do we want to have a figure explaining this stuff (see two figures to the right)? I think other browsers might have different tools (possibly more)? Chris Day 09:40, 2 February 2009 (UTC)

Many more, such as the framework of a table, appeared in Firefox 2, and I believe in IE 7. For me, FF3 had so many other improvements that I keep many "macros" such as table creation in my userspace. It would be nice to know why the other tools disappeared from (apparently) several users and how to get them back. Howard C. Berkowitz 15:53, 3 February 2009 (UTC)

Agonies and Ecstasies: Metadata and clusters

Let me preface this by saying I don't have a good answer. Further, let me add that somewise industrial physicians may determine critical intervention is needed with a programmer that isn't complaining about the software.

I regret that I forget who said it recently, but, at an operational level, a CZ article isn't an article minimally until it is in a cluster, and preferably when it is strongly linked. The simplest example is finding that our goal to 10,000 in March is much closer, after perhaps several hundred articles, listed as uncategorized, now should show in the count (eagerly awaiting a new article count) now have a status that lets them be counted.

Metadata, for many reasons, is not user friendly. Good linking is not easy; I've worked with professional libraries who see that as a key part of their work. We aren't immediately going to have much friendlier cluster creation, or semi-automated Semantic Web-style ontology generation.

In the meantime, I would encourage Citizens, who certainly are better writers than I until I drink much more coffee, think about how to put some encouragement about cluster creation and linking — requesting and encouraging, not demanding — in "how to create an article" and "how to edit an article." Howard C. Berkowitz 15:51, 3 February 2009 (UTC)

By the way, the count of live articles, meaning those we have written, or substantially changed from their source, can be found here at Category:CZ_Live. There are many other articles at Category:External Articles that do not count as well as all those that are not categorised. Chris Day 21:10, 3 February 2009 (UTC)

Immediately under the large text "Pages in category "CZ Live"" There is a sentence that currently reads "The following 400 pages are in this category, out of 9386 total." That is where the number on the home page comes from. But is it accurate? There may well be articles where the metadata got changed but the article itself has not been edited since. If that is the case there could be some that are categorised as live but do not appear in the category. I am thinking that we might want all categories to be on the metadata page itself to try and aleveate the problem of categories in articles not being refreshed without an edit. Chris Day 21:45, 3 February 2009 (UTC)

(I know, I know, I'm not quite following the Comment Commandments). OK; I see that number. Accuracy is a question; I happened to look at the list of externals, and spotted Food and Drug Administration listed there; I know I'd worked on it in the past but never noticed that it was status 4. Let me look through the external list and see if anything else jumps out at me — I'm not going to look at the metadata unless I see an article on which I've worked and thus can't be completely external. It will be interesting to see if we are closer to 10,000 than we think, especially if this is pushed as a milestone. Howard C. Berkowitz 22:07, 3 February 2009 (UTC)

Does something have to run to update it? At the very least, I just made several articles non-external but the 9386 didn't change. Howard C. Berkowitz 22:42, 3 February 2009 (UTC)

Yes, Howard, I've heard from someone (Chris, probably) that some of the templates cycle only after a page change has been made. So, in order to update the categories for instance, you have to go on to the talk page and add something (just a space is sufficient). Jones 23:54, 3 February 2009 (UTC)

I tried that, and it doesn't seem to affect the article count, although it isn't clear, in the edit text, what actually generates that count -- a nested template or a bot. Howard C. Berkowitz 00:01, 4 February 2009 (UTC)

Clearly clusters and metadata are a big problem for new users. Not to mention what is the purpose of the Definition and Related Articles subpages. i have been trying to lead by example, but you're right that a well crafted explanation is long overdue. I think that part of the reason it has not be written is that it is still evolving, however, we now have enough of a foundation to write a user friendly version. Chris Day 16:34, 3 February 2009 (UTC) 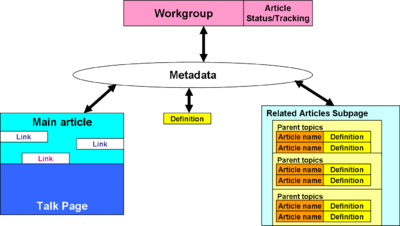 Things we tie together

Figurative back of envelope scribble follows. Maybe we can start trying to show what we are doing? One of the nuances is the difference between WP categories and CZ workgroups; of course, if workgroups were more active, the point could be better made. Howard C. Berkowitz 19:12, 3 February 2009 (UTC)

Exactly how I was thinking of approaching all these relationships too. Chris Day 19:23, 3 February 2009 (UTC)

Mea culpa, the metadata thing has me lost and I don't add it anymore when I create pages. If it were a form, perhaps, it would be easy to fill out. I get the idea: through the use of templates, the article is linked by categories to other articles. I'd be willing to work with you on a better explanation for the metadata, if for no other reason, so I understand it.

For novice users, the thing has got to be dead simple. On the historywiki I had added a subpages template with a single command {{include subpages}} and some people just didn't understand what they were doing (I understand what I'm doing adding the metadata template; I just don't know how to accurately fill it all out and how it works in full; that's a different issue than what I experienced on the historywiki). So even a simple command like that will throw off novice users. Russell D. Jones 22:12, 3 February 2009 (UTC)

OK, I won't feel guilty if I do metadata on some of your new articles. Rest assured that no one really knows, as far as I can tell, how to use the fields. There are also difference in opinion on how best to use related pages. Maybe some examples will help. Even so, I'm both always discovering new things the metadata does, as well as things it either doesn't do, or could be programmed. Howard C. Berkowitz 22:39, 3 February 2009 (UTC)

What you type-What you see

I wonder if these tables shouldn't be reversed, or the headings reversed. "What I type" comes before "What I see." With the current column headings it seem out of order because I see something before I've typed it. The alternative column headings could be something like: "If you want this" "Type it this way." This seems to be the current order of the contents of the tables. Russell D. Jones 22:45, 3 February 2009 (UTC)

There may be policy here, but I've generally stopped using <ref name=Smith /> certainly when working with paginated books or documents, and sometimes even when I can point to a specific heading of a webpage. I use it when there's no way to get finer granularity. Call it personal prejudice, but I tend to be annoyed -- and I've been guilty of it -- when finding a reference to a whole book with no way to find the fact to check.

(as an aside, after fact-checking, I wish there was a convention to respond to a citation negatively: the phrase "mind control" appears nowhere in Chapter 22).

There have been times, for example, where I've been citing something like a web (unpaginated) version of a National Intelligence Estimate, and find that 33 citations of ref 17.1, 17.2... won't help anyone find anything in a long document. This even gets to the point if it's a PDF, I'll use PDF page numbers if there are no actual page numbers in the document -- wish there was some convention for differentiate PDF document page numbers from actual numbers on the original pages. Howard C. Berkowitz 22:49, 3 February 2009 (UTC)