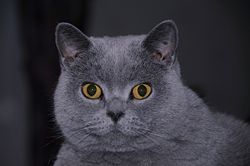 The British Shorthair hails from the United Kingdom but this cat's roots may go all the way back to Rome. They are also famous in literature, as the Cheshire Cat, found in the Lewis Carroll novel Alice In Wonderland, is reportedly based on the British Shorthair cat.[1]

The British Shorthair cat is a quiet, heavy-set cat, known for its devotion to family. This cat is often called a “cobby” cat due to its squarish heavy-set build. They have a broad chest, short to medium strong legs, rounded paws, tail thick at the base with a rounded tip, large round eyes and a medium nose. Males tend to be heavier than females. Both sexes may take up to five years to reach their full mature size.[2]

British Shorthair cats have a dense short coat that is most often seen in a beautiful blue (the animal fancy term for gray). In fact, these cats were often called British Blues as this was their best known color. Today, the British Shorthair can be found in a wide range of colors and markings.[3]

Colors range between white to orange and special markings and colorations are offered. Eye color is judged based upon the cat's specific coloration. Copper, gold, green or blue green are some of the eye colors found within the British Shorthair breed.[4]

These are quiet cats that do well with families. They do not like to be picked up or held much. They prefer snuggling next to their owner when they feel like it.[3]