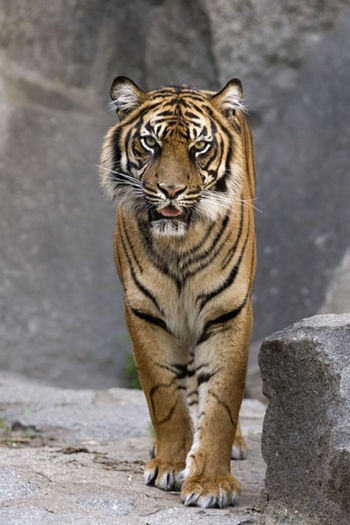 Big cat refers to the large wild felids native to the Americas, Africa, Asia, and Europe and includes such creatures as the lion, tiger and leopard.

The term is a casual one, without any strict scientific definition, and is used slightly differently by different experts. All cats are athletic carnivores and efficient predators, whose power is larger than their size might suggest. Big cats range in size from several hundred pounds, in the case of many tigers and lions, down to the roughly human weight of cheetahs and pumas. The big cats are distinguished from their much smaller brethren, like the lynx, bobcat, and domestic house cat, by their massive size. Big or small, all of the various species of the cat family are strikingly similar in both structure and behavior.

The big cats include some of the Earth's most powerful predators, but, despite being such formidable creatures, most are currently endangered in the wild.

The very largest cats are members of the genus Panthera. One meaning of the phrase big cat refers to only the four species classified in to this genus: (lions, tigers, leopards, and jaguars). Unlike cats (large or small) in other genera of the cat family, members of the genus Panthera can roar. Consequently, the ability to roar is sometimes mentioned as a distinguishing characteristic of the big cats.

Many people consider other very large cats, besides those classified as Panthera, as being "big cats", too. There are four additional species of cat who each weigh as much as humans: (cheetahs, snow leopards, clouded leopards and pumas), and all of these are sometimes called "big cats" by wildlife experts. Although there are medium-sized cats like Eurasian lynxes are substantial in weight, 55 lb (25 kg), the lynxes and other similarly sized cats are not considered big cats, even by those who use the looser definition of the phrase.

Although none of the big cats normally hunt humans as a preferred prey animal in the wild, all of them (by either definition) are capable of easily killing a human being if sufficiently provoked to attack.

Big Cats in the wild

Model and actor:in the studio

Return to the wild

The principal threats to big cats are habitat destruction and hunting, including so-called canned hunts, in which captive animals on reserves are shot for sport.

Big cats are also threatened by the exotic pet trade, which captures and breeds them for profit via sale to private owners. In the United States, 19 states have banned ownership of big cats and other dangerous exotic animals as pets, and the Captive Wildlife Safety Act[1] bans the interstate sale and transportation of these animals. Nevertheless, there are still an estimated 15,000 big cats kept captive in America, and only a small percentage of them are in accredited zoos.[2] The remainder are in private homes and nonaccredited roadside zoos, where the quality of their care is often questionable: Statistics indicate that 98 percent of big cats die within two years of being bought as pets. [3]