Bifidobacterium animalis is a Gram-positive, anaerobic, nonsporeforming bacillus. It is occasionally found in the large intestine of most mammals including humans. This bacteria plays a crucial role in keeping the microbial balance of a healthy intestinal tract, and is commonly used as a probiotics (dietary supplements of live bacteria that are beneficial for the host's health). Bifidobacteria helps digest food, and are also associated with the decreased occurrence of allergies.[1] In addition, this bacteria prevents several forms of tumor growth. The probiotics are usually obtained through dairy products and dried food supplements. These bacteria posses a heterofermentative ability, hence they can make lactic acid and ethanol along with several short-chain fatty acids-this includes formic acid. It has also been suggested by a variety of investigators that the production of small amounts of succinic acid as well as carbon dioxide is also possible by Bifidobacterium strains. The change of intestinal pH happening during carbohydrate fermentation which is created by acidic metabolites has the ability to inhibit the growth of not-desirable, potentially harmful (pathogenic) bacteria. Bifidobacteria yet induces various other significant benefits to their host (symbiotic relationship), which includes: production of vitamins, immunostimulating effects(yielding a protection against infections),and the lowering of a cholesterol.[2]

The main biological functions are coded by a single circular chromosome which is approximately 1,933,965 bp.There are no plasmids present. The genome codes for 1,528 coding sequences, two rRNA operons, and 52 tRNA genes. There are no functional prophages that were identified so far from this particular genome sequence, though a few phage-related genes including integrases were discovered. There is a fos gene cluster that has been identified through the genome analysis, this cluster is directly involved in the processing of the health promoting fructooligosachirides - also known as the bifidogenic factors. A substantial portion of the genome, approximately 787 kb, is suggested to be devoted to the polysaccharide synthesis. Polysaccharides that are synthesized in the gut microorganisms are considered as candidates for probiotic factors. There is a gene (bla_1379) that encodes the bile salt hydrolase. The genome sequencing suggests that this may be a factor responsible for the bacterium's successive tolerance to bile acids. Even though there was a substantial amount of research done so far, the entire genome structure of Bifidobacterium still appears to be meager.[3] 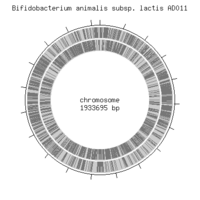 The Genome of Bifidobacterium animalis

The temperature in the range of 37-41 C appears to be the most optimal for the growth. Moreover, no growth appears below 20 C, and above 46 C. Bifidobacterium are considered acid-tolerant species. The ph around 6.5-7 is considered to be optimal. No growth occurs at a ph lower than 4.5, and above 8.5. Bifidobacterium are defined as anaerobic, nonetheless the oxygen sensitivity varies within the species, and between the strains of each species respectively. The fructose-6-phosphate phosphoketolase is believed to be the key enzyme of the hexose catabolism in Bifidobacteria. The enzyme splits the hexose phosphate into erythrose-4-phosphate and acetyl phosphate. Furthermore, from hexose phosphates and tetrose, via the subsequent action of transaldolase and transketolase, pentose phosphates are made, which then, undergo the 2,3 cleavage yield the lactic acid and the extra amounts of the acetic acid. The synthesis of the formic acid and ethanol can effect the fermentation equilibrium. Hence, various organisms make different amounts of acetate, lactate ethanol and formate under the relative equal conditions. Bifidobacterium requires substances such as N-acetylglucosamine, B-substitute disacchride, N-acetyllactosamine which are components that are found in milk, those components promote bacterial growth.

The Bifidubacterium has a cell wall structure that is typically representative of the Gram positive bacteria structure. It consists of a thick peptydoglican envelope with polysaccharides, proteins and teichoic acids embedded in it. The composition of amino acids varies among species, this permits the actual differentiation between them. The polymers to be excreted may have the structure that results from repeated subunits of glucose, galactose, and small amounts of uronic acids and hexoamines. The links that are formed by the union of lipoteichoic acids with the polysaccharide chains are believed to be crucial factors of cell adhesion to the wall of the intestine. Some members of the Bifidebacteria possess the lipoglycans of different structure, in this case the amino acid L-alanine is substituted by its D-isomer. The further immunochemical studies demonstrate that the lipoteichoic acids are also common antigens within the entire genus of Bifidobacterium. Therefore, proteins and lipoteichoic acids determine the hydrophobicity of the surface of the bacteria. Moreover, the research upon the nature of the hydrolyzing enzymes of the cell wall of Bifidobacterium illustrated several kinds of such enzymes that vary in molecular weight based on a strain.[4]

The Bifidobacteria neighbors with a big variety of other bacteria in the intestinal tract, most of this bacteria are obligate anaerobes. The different parts of this microbiota vary throughout the area of the tract. The ecological research on the Bifidobacteria that has been conducted in the past indicated the presence of more than 7000 strains that were identified from different habitats. The studies yet suggest the variability in regards of adaptation of species that originate from humans in different habitats. In other words, different kinds of Bifidabacteia are dispersed throughout the body, with a particular Bifidobacteria belonging to a certain place.[5]

The actual picture of Bifidobacterium animalis inside the large intestine

Antimicrobial susceptibility of Bifidobacterium strains from humans, animals and probiotic products [6] L. Masco1,*, K. Van Hoorde1, E. De Brandt1, J. Swings1,2 and G. Huys1 This particular study's task was carrying out research that explores "the antimicrobial susceptibility” of various strains of Bifidobacterium which includes the species from the human, animal and probiotic origin. The test was performed by agar overlay diffusion. The respective use of the Lactic acid Susceptibility test Medium (LSM) equipped with cysteine was checking for susceptibility to nine antibiotics. The study revealed the distinguishable patterns of resistance among various Bifidobacterium strains. For instance: all of the tested strains were affected by substances such as amoxicillin,erythromycin, chloramphenicol and vancomycin. However, the susceptibility for trimethoprim, ciprofloxin and tetracycline varied. Moreover, the study identified a special tet(W) gene which was responcsible for the resistance to tetracycline.

The aim of this study was to test the belief that bacteria that ferment lactic acid are able to buffer the infectious effect of Helicobacter pylori (can cause chronic gastritis) upon the successive ingestion in both animals and humans. The Bifidobacterium or Lactobacillus can be acquired via the consumption of yogurt. In order to test this hypothesis the researches have administered yogurt with the lactic bacteria in it to the patients bearing the H pylori respectively. The obtained results have proven the hypothesis. The H pilori have been inhibited by the inductive effect of the Bifidobacterium. The lactobacillus bacterium, however, did illustrate any apparent inhibition patterns. The testing was verified by the decreasing number of the of the urease activity of H pylori following the administration of the Bifidobacteriumbearing yogurt. Hence the probiotics indeed do eliminate the harmful effect of the H pylori.

This study analyzed the impact of bile upon the composition of the fatty acids that make up the bacterial cell membrane. Moreover, the study examined the characteristic membrane variance between the regular wild type Bifidobacterium strain's (IPLA 4549) membranes, versus the mutant strain of the same species (4549dOx) which has gained the resistance to the bile. The mutant-adopted Bifidobacterium strain has noticeable differences within its membrane composition. The protein residues as well as the fluidity of the membrane itself are decreased. The change in the fatty acid composition as well as the phsopholipid ratio has been observed too. Interestingly enough, the bile has affected the cell’s overall shape commonly in both wild type and the mutated strains, both strains have gained a vesicle-like structure upon treatment with the bile.