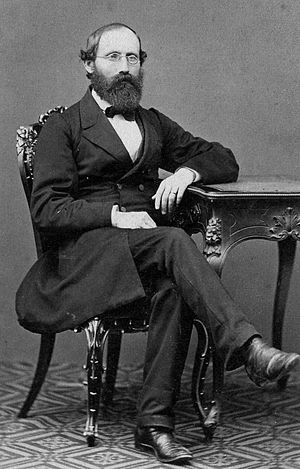 Georg Friedrich Bernhard Riemann (Breselenz, 17 September 1826 – Selasca, 20 July 1866) was a German mathematician who made important contributions to differential geometry, the theory of functions, and number theory.

Bernhard Riemann was born into a Lutheran pastor's family in the Kingdom of Hanover (now part of the Federal Republic of Germany). Already as a schoolboy he read advanced mathematical books, including Adrien-Marie Legendre's Number Theory (1830). Riemann studied mathematics at the University of Göttingen in 1846–47 and at the University of Berlin in 1847–49. In 1849 he returned to Göttingen where he started his PhD work on function theory. In 1851 he received his PhD degree—his supervisor was Gauss—and became assistant to the mathematical physicist Wilhelm Eduard Weber. Bernhard Riemann made his "Habilitation" (advanced Doctor's degree) in 1854.

In 1857 Riemann received an appointment as "Professor Extraordinarius" (kind of associate professorship, financially supported mainly by students following his lectures) and at the age of thirty three he became a full professor in mathematics. His predecessor on this chair, held previously by Gauss, was Peter Gustav Dirichlet, who had died in 1859. In 1862 Riemann married Elise Koch and had a daughter named Ida, who was born in Pisa (1863). Shortly after the marriage he fell seriously ill with tuberculosis. Repeated trips to Italy failed to stem the progress of the disease, and he died thirty nine years old in Italy in Selasca (now a hamlet of Verbania on Lake Maggiore).

Notwithstanding his short life, Riemann is one of history's prominent mathematical geniuses, with his influence lasting to this day.

Riemann's thesis of 16 December 1851 was on the theory of complex variables and, in particular, on what we now call Riemann surfaces. By these surfaces he introduced topological methods into complex function theory. Augustin-Louis Cauchy in France had founded the theory of complex variables a few decades before and Victor Alexandre Puiseux, also in France, had recognized branch points in multi-valued functions. The latter were generalized by Riemann to surfaces. Riemann's thesis was a strikingly original piece of work which examined geometric properties of analytic functions, conformal mappings and the connectivity of surfaces.

On 10 June 1854 Riemann delivered in Göttingen his Habilitation lecture: Über die Hypothesen welche der Geometrie zu Grunde liegen (On the hypotheses that lie at the foundations of geometry), that became a classic of mathematics. The elderly Gauss, who as examiner heard the lecture, was greatly impressed. Riemann argued that the fundamental ingredients for (differential) geometry are a set of points (called today a manifold) and a way of measuring distances along curves in the space. He argued that the space need not be a Euclidean space and that it could have any finite dimension. Riemann's work on differential geometry was carried on by the Italian school of mathematicians, such as Beltrami, Ricci, Bianchi, and Levi-Civita, culminating into the branch of mathematics that physicists call tensor analysis. This part of mathematics formed Albert Einstein's toolbox when he formulated the theory of General Relativity. So, one can say that Riemann's Habilitation lecture laid the foundation for one of the most far-reaching theories of physics.

Riemann's Doktorvater (PhD supervisor) Gauss had done much work on number theory and Riemann himself on complex function theory. In 1859 Riemann combined the two theories by introducing complex functions into number theory. He took the zeta function, which had been shown previously to have a close connection to the prime numbers, and showed how to define it as a complex-valued function of a complex argument

. Riemann conjectured that the latter zeros all have

, i.e, lie on a line (the critical line) parallel to the imaginary axis. This is the content of Riemann's hypothesis. Methods of complex function theory give much information about the distribution of prime numbers, provided it can be shown that all the non-negative zeros lie on this line. All these zeros discovered thus far have been on the critical line. The Riemann hypothesis was one of the 23 problems that David Hilbert challenged mathematicians to solve in his famous 1900 address, The Problems of Mathematics; this particular challenge has not been met thus far.