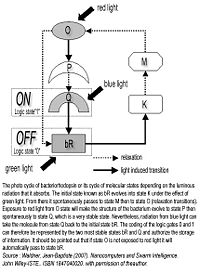 The photo cycle of bacteriorhodopsin or its cycle of molecular states depending on the luminous radiation that it absorbs. The initial state known as bR evolves into state K under the effect of green light. From there it spontaneously passes to state M then to state O (relaxation transitions). Exposure to red light from O state will make the structure of the bacterium evolve to state P then spontaneously to state Q, which is a very stable state. Nevertheless, radiation from blue light can take the molecule from state Q back to the initial state bR. The coding of the logic gates 0 and 1 can therefore be represented by the two most stable states bR and Q and authorize the storage of information. It should be pointed out that if state O is not exposed to red light it will automatically pass to state bR .[1].

Bacteriorhodopsin is a purple colored protein which is found in the membrane of certain bacteria (halobacteria) which are found at the bottom of salty marshes (the origin of the different colors of salt marshes). The bacterium contains a molecular pigment called retinal which is very similar to the one which makes up the retina of our eyes. It is the simplest known protein which is capable of converting luminous energy into chemical energy (i.e. capturing light energy and using it to move protons across the membrane out of the cell. Hereby, the resulting proton gradient is converted into chemical energy). Bacteriorhodopsin is therefore a protein for bioenergetics.

The understanding of how this molecule, a real proton pump, functions is achieved by studying its fine structure.

For approximately 15 years, researchers have been studying organic molecules and their potential applications in information technology, such as the use of biological molecules to encode, manipulate and retrieve information, in other words to allow for the development of organic memory circuits. There are existing biological molecules whose two stable states of their atomic structure can be controlled. These states represent the logic states of 0 and 1 by benefiting from the photo cycle of these photosensitive proteins

The rhodopsin molecule changes form when it is exposed to a luminous source and then either works like a switch or a transistor. It can therefore process information. The photo cycle of bacteriorhodopsin is in fact an ideal candidate for storing binary information: the bR-state, or logic value 0, and the Q-state, or logic value 1, are intermediary structural states of the molecule and can last for several years[2].