The BSD Daemon is the mascot of the original Berkeley Software Distribution of the Unix operating system.[1][2] The name is derived from a common Unix application called a daemon, which is a program that runs solely in the background, typically with no human intervention (web servers such as Apache typically run as daemons). The BSD Daemon commonly carries a trident (though sometimes another forklike implement such as a pitchfork is depicted instead) as a play on the way Unix processes rely on the fork function to start other processes.

In old English, the word "daemon" means a deified being - that is, one who is half man and half god. Despite a rumor started by an advertiser at Walnut Creek, possibly because he is normally pictured wearing shoes which are not unlike Converse's Chuck Taylors, its name is not "Chuck". The BSD Daemon has no official name, but may be referred to as "beastie", which is actually a play on the pronunciation of BSD.

The story of the daemon began in 1976, while Mike O'Brien was living in Chicago. It was there that he met up with a well known comic artist named Phil Foglio. At the time, O'Brien was working as a locksmith. So when Foglio's roommate skipped town, he called upon O'Brien to crack their apartment's wall safe, for his former roommate was the only person who knew the combination. 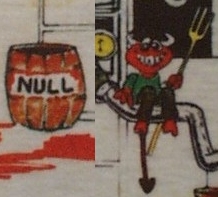 The first daemon, drawn by Phil Foglio. Notice he's sitting on a Unix pipe, near a bit bucket

Uncertain of his ability to successfully complete the difficult task, the only payment O'Brien asked of Foglio was a piece of original artwork for a t-shirt. Astonishingly, he was able to crack the code in a mere fifteen minutes. He then snapped a photograph of his Unix machine to give to a very grateful Foglio, showing him the visual puns he desired to include on his t-shirt, such as a "bit bucket" named /dev/null and demons with forks running along pipes (all of which allude to various concepts in Unix). This /dev/null bucket and the original daemon both showcase O'Brien's humor and Foglio's youthful talent, as the photo on the left shows.[3]

Sam Leffler, one of the early BSD developers, left to join Lucasfilm. It was there that he met animation director John Lasseter, who was on sabbatical from Walt Disney. In 1983, Lasseter drew a grayscale daemon for the manuals of 4.2BSD. This image was later colorized in 1989 by a group of individuals from Kansas State University for a t-shirt. Three years later, this t-shirt was sent to the press once more for a fund raiser, this time with a humorous reversal of the typical license agreement:

This shirt is provided ``AS IS'' with NO WARRANTY, either expressed or implied. Any damages incurred from wearing this shirt are the sole responsibility of the wearer. The wearer should be prepared to briefly explain hundreds of times what BSD and UNIX mean. The wearer should also note that this shirt is NOT flame retardant, bullet-proof, or associated with ANY toll free 800 numbers. Modifications to the shirt are allowed as long as this notice, and the UNIX trademarks remain intact. The shirt owner may freely allow others to wear this shirt within the expressed terms and limitations of this license.[4]

Five years later, Marshal Kirk McKusick hired him to draw the cover art for his book, "The Design and Implementation of the 4.3BSD Operating System", which he had co-wrote with Leffler. McKusick then purchased the rights to the image in order to ensure that the daemon be used only in conjunction with the BSD operating system. Soon after the book's publication, it became the official BSD mascot. 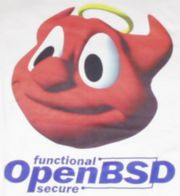 The OpenBSD version of the BSD Daemon

The daemon has gone through many versions, such as the re-make for OpenBSD versions 2.3 and 2.4, drawn by Erick Green (see photo at right), which uses a halo to personify the system's high security. This image was originally planned to be of its full body, but, unfortunately, the artwork was not completed in time for the OpenBSD 2.3 release. It was later completed, however, and was shipped with the 2.4 release.[5]

The BSD Daemon is sometimes paired with the Linux operating system mascot, Tux the penguin. They appear together in humorous wallpapers and drawings, although they are generally of dubious legality, as McKusick requires that his mascot be used in relation to the BSD operating system. The daemon was also constructed in Lego bricks by Eric Harshbarger, the same artist who created the Lego model of Tux.[6]