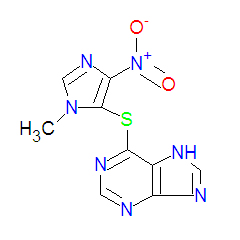 Azathioprine, also called sodium azathioprin, azothioprine and azathioprin, is an immunosuppressive agent used in combination with cyclophosphamide and hydroxychloroquine in the treatment of rheumatoid arthritis. It is a known carcinogen and was initially used as a chemotherapy drug, although now it is rarely used for that purpose. Currently it is used for immunosuppression in organ transplantation and autoimmune diseases such as rheumatoid arthritis, irritable bowel syndrome or Crohn's disease. Azathioprine is a pro-drug that is converted to the active metabolite 6-mercaptopurine. Azathioprine acts to inhibit purine synthesis necessary for the proliferation of cells, especially leukocytes and lymphocytes. It is a safe and effective drug used alone in certain autoimmune diseases, or in combination with other immunosuppressants in organ transplantation. Bone marrow suppression is the most serious side effect of its use and it should not be used in conjunction with other purine analogues such as allopurinol.

The most up-to-date information about Azathioprine and other drugs can be found at the following sites.