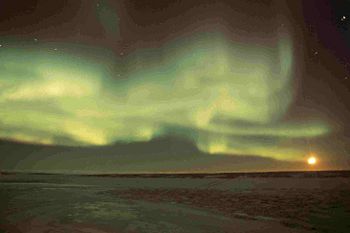 The Aurora Borealis, also called the Northern Lights, is an electromagnetic phenomenon visible near the north magnetic pole.[1]

Planet Earth is surrounded by a magnetic field.[1] The magnetic field captures charged particles from outer space, and diverts them to the Earth's magnetic poles. When these charged particles interact with the upper atmosphere there are various kinds of exchanges of energy, resulting in the transmission of photons of various frequencies -- including visible light.

When the solar wind is at its most intense it can knock out telecommunication satellites.[1]