) refers to the change of an atmospheric variable with a change of altitude, the variable being temperature unless specified otherwise (such as pressure, density or humidity).[1][2][3] While usually applied to Earth's atmosphere, the concept of lapse rates can be extended to atmospheres (if any) that exist on other planets.

The lapse rate is most often denoted by the Greek capital letter Gamma,

or Γ,[4] but not always. For example, the U.S. Standard Atmosphere uses L to denote lapse rates:[5] A few others use the Greek lower case letter gamma,

, which is an unfortunate choice since gamma is also used for the specific heat ratio.

Since the atmospheric pressure decreases with altitude (see Earth's atmosphere), the volume of an air parcel expands as it rises. Conversely, if a parcel of air sinks from a higher altitude to a lower altitude, its volume is compressed by the higher pressure at the lower altitude. An adiabatic lapse rate is the rate at which the temperature of an air parcel changes in response to the expansion or compression process associated with a change in altitude, under the assumption that the process is adiabatic (meaning that no heat is added or lost during the process).[6][7]

Earth's atmospheric air is rarely completely dry. It usually contains some water vapor and when it contains as much water vapor as it is capable of, it is referred to as saturated air (i.e., it has a relative humidity of 100%). The dry adiabatic lapse rate refers to the lapse rate of unsaturated air (i.e., air with a relative humidity of less than 100%). It is also often referred to as the dry adiabat, DALR or unsaturated lapse rate. It should be noted that the word dry in this context simply means that no liquid water (i.e., moisture) is present in the air ... water vapor may be and usually is present.

The dry adiabatic lapse rate can be mathematically expressed as:[8][9]

The troposphere is the lowest layer of the Earth's atmosphere. Since

vary little with altitude, the dry adiabatic lapse rate is approximately constant in the troposphere.

An unsaturated parcel of air will rise from Earth's surface and cool at the dry adiabatic rate of – 9.8 K/kilometre (5.4 °F/1000 ft) until it has cooled to the temperature, known as the atmospheric dew point, at which the water vapor it contains begins to condense (i.e., change phase from vapor to liquid) and release the latent heat of vaporization. At that dew point temperature, the air parcel is saturated and, because of the release of the heat of vaporization, the rate of cooling will decrease to what is known as the wet adiabatic lapse rate. This rate is also often referred to as the wet adiabat, saturated lapse rate, SALR, moist adiabatic lapse rate or MALR.[6][7]

After the air parcel has reached its dew point and cooling has decreased to the wet adiabatic lapse rate, it will eventually rise to a point where all of its water vapor has condensed and its rate of cooling will then revert back to the dry adiabatic lapse rate.

The wet adiabatic lapse rate can be mathematically expressed as:[10]

In general, the ambient atmospheric air in the troposphere decreases with increasing altitude and so the environmental lapse rate is denoted as being negative. A committee consisting of 29 organizations and universities in the United States, established an average environmental lapse rate named the U.S. Standard Atmosphere[5] having various values, as shown in the adjacent table, which are dependent on the altitude region of Earth's atmosphere. From the Earth's surface to an altitude of 11 kilometres, the value of the U.S. Standard Atmosphere is – 6.5 K/km (3.57 °F/1000 feet).

The adjacent graph, published by the United States National Weather Service (NWS),[14] depicts the average profile of temperature versus altitude in the various layers the Earth's atmosphere. As can be seen, it is generally in fair agreement with the above tabulated lapse rates of the U.S. Standard Atmosphere.

Surface inversion layer
During the night, the Earth's surface loses heat rather rapidly by radiation while the ambient air above the surface looses heat more slowly by convection. Thus, what is called a radiation inversion forms in which the air temperature for some distance above the ground is higher than the air temperature very near to the ground. In other words, the environmental lapse rate within the surface inversion layer is positive and increases with altitude. Air very near Earth's surface which has flowed across a cold surface (such as a lake), and been cooled by advection, may also form a surface inversion layer called an advective inversion. Advection is a meteorological term for heat transfer occurring from horizontal air motion.[11] 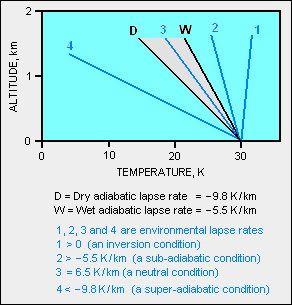 The numerical value of the environmental lapse rate determines the stability category of the atmospheric air. Referring to the adjacent diagram:

An understanding and knowledge of atmospheric stability is important for many reasons. What follows is a brief discussion of some of those reasons:

The atmospheric stability has a large impact on the deposition and drift of aerially applied sprays of various farm crop protection materials.[20]