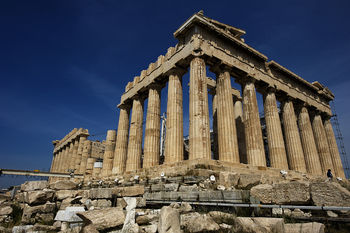 (CC [1]) Photo: Andrew Baldwin
The Parthenon sits within the Acropolis of Athens.

Athens (Modern Greek: Αθήνα, Athina; Ancient Greek: Ἀθῆναι, Athē̃nai) is the capital city of Greece (Ελλάδα, Ελλάς) with more than 4 million people in the metropolitan area and around 1 million in the city centre.

It is one of the oldest continuously inhabited cities in the world: its earliest evidence of settlement, on the hill of the Acropolis, dates back 3,000 years. The name of the city is inextricably linked with the goddess Athena, the daughter of Zeus in Greek mythology, who was depicted as a virgin goddess with a decidedly unfeminine nature that allowed her to play a leading role in a world of men.

Athens was the first state to successfully practise democracy in its ancient form. The pre-eminent symbol of both ancient and modern Athens is the temple of the Parthenon, on the summit of the Acropolis, built in the aftermath of the Persian Wars (ending 448 BC) and dedicated to the goddess Athina. After its Golden Age as the city-state where some of the world's greatest thinkers and writers resided, Athens lost importance first of all during the Byzantium period and later during its possession by the Ottoman Empire. In the early days of the Greek Revolution (1821-1830), control of the Acropolis (and the flag flown on it) passed back and forth between Greek and Ottoman forces, until well after the formation of the new Greek state.

Athens was not originally chosen as the capital city of modern Greece, partly owing to its tiny population and relative unimportance at that time. In 1834 Athens replaced Nafplio as Greece's capital. Today, Athens and its suburbs house more than 4 million people, or over one third of the country's population, and is indisputably the locus of power and commerce in modern Greece.