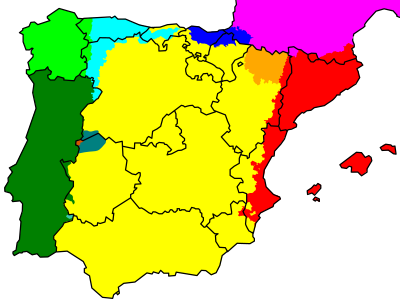 The Asturian-Leonese languages are shown in blue in this map of the languages of the Iberian peninsula.

Astur-Leonese—also called Asturian-Leonese or Asturian or Leonese—(in its own language: asturllionés, asturianu, llionés and popularly bable) is a Romance language spoken in part of Spain (around Asturias, northwestern León and western Cantabria) and part of Portugal (around the boundary city of Miranda do Douro).

It is a local official language in the city of Miranda (Portugal) where it is called Mirandese. It receives some support by the autonomous region of Asturias but is not recognized as an official language neither in Asturias, nor in León and Cantabria. A lot of inhabitants can speak daily Asturian-Leonese although their tongue is dominated by the state languages, Spanish and Portuguese.

Asturian-Leonese was often considered as a Spanish dialect in traditional Romance linguistics but it is now more and more viewed as an autonomous language by most specialists, since it has a quite original, old and independent literary tradition and a growing consciousness of language autonomy.[1]

The language enjoyed a dynamic life during the Middle Ages, when the Kingdom of León was expanding southwards thanks to the Reconquista. A modern literature has developped since the 17th century, mostly in Asturias.