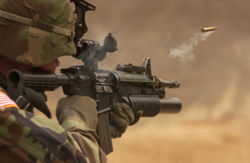 An Army is a term either referring to one of the largest types of formation for a land-based military force, or the entirety of a nation's military force responsible for its land defenses, both of which are composed of soldiers, trained to engage in war.

An army, as a single in-theater force, operates at a strategic level, but is composed of smaller operational units which operate at the level of operational art or tactics.

Not all countries use "army" to indicate the same level of command. Western practice is that a field army is made up of two or more corps, and is commanded by a full general or lieutenant general. WWII Japanese "armies" were of several levels; an unqualified "army" was equivalent to a Western corps, an "area army" to a field army, and a "general army" to an army group.

Armies are most commonly numbered, with the designation written out Third United States Army or First Canadian Army. The Japanese Kwantung Army was actually at army group/theater level. Some countries use honorific, branch, or both in their army names, such as the Soviet First Guards Army or Sixth Guards Tank Army.