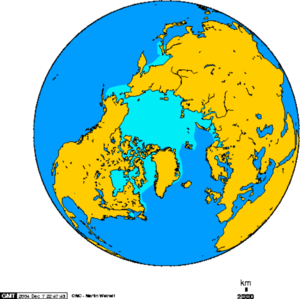 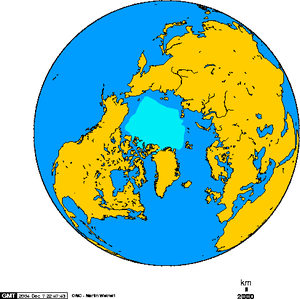 The Arctic Ocean, northernmost of the earth's oceans, is located largely in the Arctic North Polar Region. While it is, by mean depth -- 1,800 meters -- the shallowest of the world's oceans, it also includes two deep basins, the Eurasian Basin and the Canadian Basin, each of which is more than 4,000 meters in depth. Most of the Arctic Ocean is covered year-round by the Polar Ice Cap, with seasonal sea ice extending into adjacent waters. Since it is almost entirely enclosed by continental land masses and islands, some oceanographers prefer to call it the Arctic Mediterranean Sea, but it is widely recognized as an ocean, and is classified as such by the International Hydrographic Organization. The Arctic Ocean's temperature and salinity vary seasonally as the ice cover melts and freezes. The salinity is on average the lowest of the five major oceans. This is due to low evaporation, as well as heavy freshwater inflow and limited salt water inflow from other oceans.

The greatest inflow of water comes from the Atlantic by way of the Norwegian Current, which then flows along the Eurasian coast. Water also enters from the Pacific via the Bering Strait. The East Greenland Current carries the major outflow. Ice covers most of the ocean surface year-round, causing subfreezing temperatures much of the time. The Arctic is a major source of very cold air that inevitably moves toward the equator, meeting with warmer air in the middle latitudes and causing rain and snow. Marine life abounds in open areas, especially the more southerly waters. The ocean's major ports are the Russian cities of Murmansk and Arkhangelsk. The Arctic Ocean is important as the shortest air route between the Pacific coast of North America and Europe overflies it.

The Arctic Ocean occupies a roughly circular basin and covers an area of about 14,056,000 square km (5,440,000 mi²), slightly less than 1.5 times the size of the United States. The coastline length is 45,389 kilometers (28,203 mi). Nearly landlocked, it is surrounded by the land masses of Eurasia, North America, Greenland, and several islands. It includes Baffin Bay, Barents Sea, Beaufort Sea, Chukchi Sea, East Siberian Sea, Greenland Sea, Hudson Bay, Hudson Strait, Kara Sea, Laptev Sea, White Sea and other tributary bodies of water. It is connected to the Pacific Ocean by the Bering Strait and to the Atlantic Ocean through the Greenland Sea. Its geographic coordinates are: 90°00′N, 0°00′E

The Arctic Ocean contains a major chokepoint in the southern Chukchi Sea, which provides northern access to the Pacific Ocean via the Bering Strait between North America and Russia. The Arctic Ocean also provides the shortest marine link between the extremes of eastern and western Russia. There are several floating research stations in the Arctic, operated by the U.S. and Russia.

For much of Western history, the geography of the North Polar regions remained largely unexplored and conjectural. Pytheas of Massalia recorded an account of a journey northward in 325 B.C. to a land he called Ultima Thule, where the sun only set for three hours each day and the water was replaced by a congealed substance "on which one can neither walk nor sail." He was probably describing loose sea ice known today as "growlers" and "bergy bits." His "Thule" may have been Iceland, though the Faroe Islands have also been suggested.

Early cartographers were usure whether to draw the region around the Pole as land (as in the map of Johann Ruysch in 1507) or water (as with Martin Waldseemüller's world map of 1513). The fervent desire of Europeans for a northern passage to "Cathay" (China) caused water to win out, and by 1723 mapmakers such as Johann Baptist Homann featured an extensive "Oceanus Septentrionalis" at the northern edge of their charts. The few expeditions to penetrate much beyond the Arctic Circle in this era added only scattered islands, such as Nova Zemlya (11th century) andSpitzbergen (1596), though since these were often surrounded by pack-ice their northern limits were not so clear. The makers of navigational charts, more conservative than some of the more fanciful cartographers, tended to leave the region blank, with only the bits of known coastline sketched in.

This lack of knowledge of what lay north of the shifting barrier of ice gave rise to a number of conjectures. In England and other European nations, the myth of an Open Polar Sea was long-lived and persistent. John Barrow, longtime Second Secretary of the British Admiralty, made this belief the cornerstone of his campaign of Arctic exploration from 1818 to 1845. In the United States in the 1850s and '60s, the explorers Elisha Kent Kane and Isaac Israel Hayes both claimed to have seen the shores of this elusive body of water. Even quite late in the century, the eminent authority Matthew Fontaine Maury included a description of the Open Polar Sea in his textbook The Physical Geography of the Sea (1883). Nevertheless, as all the explorers who trekked closer and closer to the pole reported, the Polar Ice Cap was ultimately quite thick, and persists year-round. It is possible however that with global warming these visions may someday be considerably closer to the truth.

There is considerable seasonal variation in how much pack ice covers the Arctic Ocean. Much of the ocean is also covered in snow for about 10 months of the year. The maximum snow cover is in March or April — about 20 to 50 centimeters (8 to 20 in) over the frozen ocean. Due to the low rate of evaporation and the cold temperatures, the relative humidity of the air tends to be very low.

Petroleum and gas fields, placer deposits, polymetallic nodules, sand and gravel aggregates, fish, seals and whales can all be found in abundance in the region.

The political dead zone near the center of the sea is also at the center of a mounting dispute between the United States, Russia, Canada, Norway, and Denmark. It is considered significant because of its potential to contain as much as or more than a quarter of the world's oil and gas resources, the tapping of which could greatly alter the flow of the global energy market. The Arctic's New Gold Rush - BBC

Ice islands occasionally break away from northern Ellesmere Island, and icebergs are formed from glaciers in western Greenland and extreme northeastern Canada. Permafrost is found on most islands. The ocean is virtually ice locked from October to June, and ships are subject to superstructure icing from October to May.

Endangered marine species include walruses and whales. The area has a fragile ecosystem which is slow to change and slow to recover from disruptions or damage. The polar icepack is thinning, and there is a seasonal hole in ozone layer over the North Pole.

Reduction of the area of Arctic sea ice will have an effect on the planet's albedo, thus possibly affecting global warming. Many scientists are presently concerned that warming temperatures in the Arctic may cause large amounts of fresh meltwater to enter the North Atlantic, possibly disrupting global ocean current patterns. Potentially severe changes in the Earth's climate might then ensue. 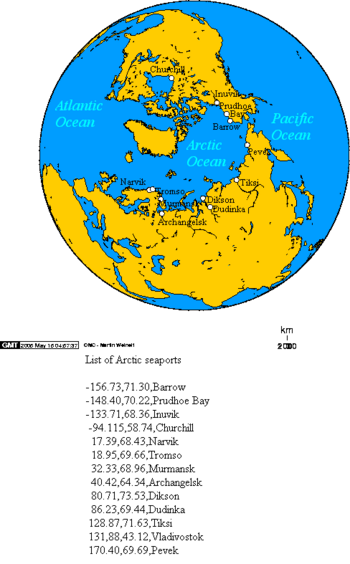 Based on public domain text by US Naval Oceanographer: http://oceanographer.navy.mil/arctic.html