See the tab above for Recipes of Alkaline pasta. 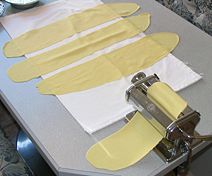 © Photo: Hayford Peirce
Rolling the dough through a pasta machine. 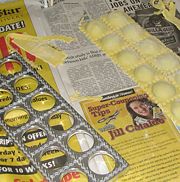 © Photo: Hayford Peirce
Making ravioli with a recipe from the Don Camillo restaurant in Nice.

Alkaline pasta, or alkaline noodles, is a variation of standard Chinese or Italian noodles in which a much higher than usual quantity of an alkaline component is part of the fabrication process. This is usually achieved by the introduction of sodium carbonate (Na2CO3 or sodium salt of carbonic acid) into the primary ingredients. In parts of China in which alkaline wheat noodles are common, traditional ones are made with alkaline water from wells. More commonly a mixture of sodium carbonate, which is also an anti-caking agent, and potassium carbonate is added directly. This mixture is what the Chinese call "jian" and what the Japanese call "kansui"; it is best known in the West for the ramen soup noodles from Japan that use it. [1] Sometimes kansui can also be a solution of sodium hydroxide.[2]

The addition of alkaline materials to such dishes as pasta makes them feel slippery in the mouth and on the fingers; they also develop a yellow color and are more elastic than ordinary noodles. Various flours such as ordinary all-purpose white flour, bread flour, and semolina flour can be used, with somewhat varying results. [1]'Noodles prepared in this manner are actually akin to the gelatinous Scandinavian specialty known as lutefisk, which uses lye, a far more powerful agent.

Noodles from Gansu Province in China include the chewy "hand-pulled" type, where the noodles are formed purely by hand, with no rolling or extrusion. Proper texture requires the addition of an alkaline ingredient called peng derived from certain ashes. Ash contains potassium carbonate, which makes the noodle dough softer and more tender by inhibiting the development of gluten. "Lan Zhou pulled noodles", even though the noodle makers may not be from Lan Zhou, the capital of Gansu, are becoming, according to the New York Times, "a catchphrase that signifies deliciousness everywhere, [like] 'Chicago pizza' or 'New York bagels'." [3]

Harold McGee, a well-known American food scientist and author, has drawn on the experience of such noted chefs as David Chang, owner of the Momofuku line of restaurants, and Fuchsia Dunlop of London, to outline a simple method by which home chefs can make alkaline noodles.

A few tablespoons of ordinary baking soda are spread out in a thin layer on a cookie sheet and baked at 300° F (150° C) for an hour. Baking soda is sodium bicarbonate; by baking it, water and carbon dioxide are exuded and what is left is alkaline—enough to cause discomfort if touched to the skin. In plain text, the chemical reaction is sodium bicarbonate (baking soda) + heat → sodium carbonate + water vapor + carbon dioxide gas.[4] Only a very small of amount of the resultant sodium carbonate is used in the preparation of McGee's pasta dish, just 1 teaspoon of it to 1-1/2 cups of semolina flour. When preparing the pasta, the sodium carbonate is first dissolved in a small quantity of water, which is then slowly added to the semolina. Afterwards, the kneaded dough is allowed to rest for an hour and is then rolled out very thin through a pasta machine and processed into the desired form of noodles. The unused portion of the sodium carbonate can be stored in a tightly sealed bottle and kept for future use.