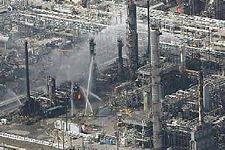 Accidental release source terms are the mathematical equations that quantify the flow rate at which accidental releases of air pollutants into the ambient environment can occur at industrial facilities such as petroleum refineries, petrochemical plants, natural gas processing plants, oil and gas transportation pipelines, chemical plants, and many other industrial activities. Governmental regulations in a good many countries require that the probability of such accidental releases be analyzed and their quantitative impact upon the environment and human health be determined so that mitigating steps can be planned and implemented.

There are a number of mathematical calculation methods for determining the flow rate at which gaseous and liquid pollutants might be released from various types of accidents. Such calculational methods are referred to as source terms, and this article on accidental release source terms explains some of the calculation methods used for determining the mass flow rate at which gaseous pollutants may be accidentally released. Given those mass flow rates, atmospheric dispersion modeling studies can then be performed.

When gas stored under pressure in a closed vessel is discharged to the atmosphere through a hole or other opening, the gas velocity through that opening may be choked or it may be non-choked. Choked flow (also referred to as critical flow) is a limiting or maximum condition at which the gas velocity has attained the speed of sound in the gas.

ranges from about 1.09 to about 1.41, and therefore the expression in (1) ranges from 1.7 to about 1.9, which means that choked velocity usually occurs when the absolute upstream vessel pressure is at least 1.7 to 1.9 times as high as the absolute downstream pressure. In the case of a leak to the ambient atmosphere, the downstream pressure is the atmospheric pressure.

where the terms are defined as in listed below. If the upstream gas density,

is not known directly, then it is useful to eliminate it using the Ideal gas law corrected for the real gas compressiblity:

For the above equations, it is important to note that although the gas velocity reaches a maximum and becomes choked, the mass flow rate is not choked. The mass flow rate can still be increased if the upstream pressure is increased or the temperature is decreased.

or this equivalent form:

The above equations calculate the initial instantaneous mass flow rate for the pressure and temperature existing in the source vessel when a release first occurs. The initial instantaneous flow rate from a leak in a pressurized gas system or vessel is much higher than the average flow rate during the overall release period because the pressure and flow rate decrease with time as the system or vessel empties. Calculating the flow rate versus time since the initiation of the leak is much more complicated, but more accurate. A comparison between two methods for performing such calculations is available online.[5]

which applies to any ideal gas or whether they are using

which only applies to a specific individual gas. The relationship between the two constants is

Since the downstream temperature

is unknown and is required to calculate the downstream density

, the isentropic expansion equation below [8] is used to obtain

Combining equation (2) with the definition of

Using equation (3) with Ramskill's equation (1) to determine non-choked mass flow rates for gases gives results identical to those obtained using the non-choked flow equation presented in the previous section above.

Three different methods of calculating the rate of evaporation from a non-boiling liquid pool are presented in this section. The results obtained by the three methods are somewhat different.

The following equations are for predicting the rate at which liquid evaporates from the surface of a pool of liquid which is at or near the ambient temperature. The equations were derived from field tests performed by the U.S. Air Force with pools of liquid hydrazine. [2]

The following equations are for predicting the rate at which liquid evaporates from the surface of a pool of liquid which is at or near the ambient temperature. The equations were developed by the United States Environmental Protection Agency using units which were a mixture of metric usage and United States usage.[3] The non-metric units have been converted to metric units for this presentation.

The U.S. EPA also defined the pool depth as 0.01 m (i.e., 1 cm) so that the surface area of the pool liquid could be calculated as:

The following equations are for predicting the rate at which liquid evaporates from the surface of a pool of liquid which is at or near the ambient temperature. The equations were developed by Warren Stiver and Dennis Mackay of the Chemical Engineering Department at the University of Toronto. [9]

The following equation is for predicting the rate at which liquid evaporates from the surface of a pool of cold liquid (i.e., at a liquid temperature of about 0 °C or less). [2]

Liquified gases such as ammonia or chlorine are often stored in cylinders or vessels at ambient temperatures and pressures well above atmospheric pressure. When such a liquified gas is released into the ambient atmosphere, the resultant reduction of pressure causes some of the liquified gas to vaporize immediately. This is known as "adiabatic flashing" and the following equation, derived from a simple heat balance, is used to predict how much of the liquified gas is vaporized.

If the enthalpy data required for the above equation is unavailable, then the following equation may be used: