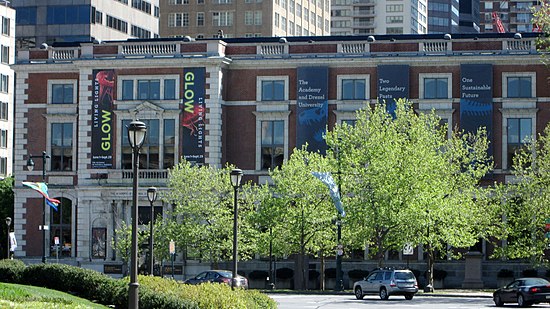 The Academy of Natural Sciences of Drexel University, located in Philadelphia, PA, is the oldest natural history museum in the U.S.. Besides a museum, its building houses extensive curated collections of animal, plant and mineral specimens, and also an environmental science research institute. The Academy was founded in 1812 and has been continuously open to the public since 1832. Around Philadelphia, the Academy building on 19th Street (dating from 1876) is known as "the dinosaur museum". It is located on the southeast end of Benjamin Franklin Parkway at Logan Square, in the museum district[1]. The Academy's extensive specimen collections and historical data are used by scientists world-wide for environmental and historical research. Academy-sponsored expeditions to collect plant, animal and mineral specimens have included the Arctic to Central America, Africa and Asia. Field work for environmental research is mostly centered around the wetlands, lakes, rivers, streams and ponds of North America but has ranged as far as Mongolia. Environmental research also sometimes contributes specimens to the curated collections.

The Academy is a 501(c)(3) not-for-profit organization governed by a Board of Trustees and since 2011 has been affiliated with Drexel University. Management of the Academy has long been complicated because, by the mid twentieth century, the Academy had evolved to consist of three distinct parts with different funding models:

Historically, there was struggle over scarce funding among the three major areas. Collections and research not only fought with each other for funding, but both were taxed to keep the museum financially viable and open. Around 2015(?), the specimen collections and environmental research institute were moved into a single organizational branch. The funding brought in for the specimens and research branch is still taxed to help fund the museum, but they also still benefit from shared use of the building and facilities and co-location with the museum.

The Diatom Herbarium includes around 250,000 slides (curated and non-curated) of both fossil and recent diatoms collected from fresh, brackish, and marine habitats. About 5,000 of the specimens are types. The herbarium includes extensive materials collected as part of freshwater environmental surveys from throughout the United States which were the work of the former Department of Limnology, and its successor, the Phycology Section of the Patrick Center for Environmental Research as led by Ruth Patrick. Often extending over decades, these surveys present a view of long-term changes in diatom populations, some of which have been determined to be important markers about the health of lakes and streams. The Academy's Diatom Herbarium is one of the two largest such herbariums in the world, the other being ?.