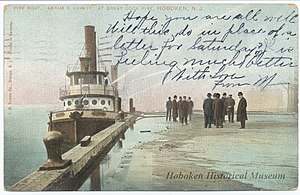 The Abram S. Hewitt was a coal-powered fireboat operated by the Fire Department of New York City from 1903 to 1958.[1][2][3] She was the department's last coal-powered vessel.

She was launched on July 11, 1903, at the shipyards of the New York Shipbuilding Corporation in Camden, New Jersey.[4] She was commissioned in October 1903, and was named after recently deceased former mayor Abram Hewitt.[4][1][2]

On August 14, 1913, a fire was discovered at a large oil storage yard, on what was then Long Island City, and the Abram S. Hewitt was sent to try to put it out.[6] While extinguishing the fire her "bow gun", her frontmost water cannon, burst from her footings, flying into the air, and striking Bertram Johnson, the firefighter assigned to it. He was declared dead, at the scene.

On January 28, 1927, the Abram S. Hewitt's captain, John Connoly, was jolted into the Hudson River by a collision.[7] Although he was burdened by heavy fire equipment he was able to swim to a barge, where he clung to a boathook lowered to him by a crew member. It took the the Abram S. Hewitt half an hour to return and rescue him, because it was damaged by the collision.