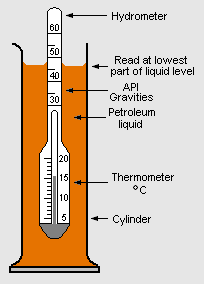 The API gravity scale has been universally adopted and commonly used in the petroleum industry worldwide since the about 1921.

The relationship between API gravity and specific gravity (SG) of a petroleum liquid is mathematically expressed as:

Conversely, the specific gravity may be obtained from the API gravity by this expression:

API gravity can be measured using an API hydrometer graduated with the API scale as per ASTM D-287, Standard Test Method for API Gravity of Crude Petroleum and Petroleum Products (Hydrometer Method).[2]

Alternatively, the density of the petroleum liquid may be measured at 60 °F may be determined and divided by the density of water at 60 °F to obtain the specific gravity of the liquid at 60 °F, which can then be converted to the °API using the equation in the previous section above.

Knowledge of relative density or specific gravity has been with us since the days of Archimedes in 250 BC, with the observation that light objects can float while heavier ones will sink in water.[3] Hypatia (born ca. 350 and died 415 AD), a Greek scholar from Alexandria in Egypt, is reputed to have invented the hydrometer.[4]

In 1675, hydrometers were developed by Robert Boyle, a British chemist and physicist. Around 1798, Antoine Baumé, a French scientist, designed the Baumé hydrometer scales for liquids both lighter and heavier than water.[5]

Shortly after its formation in 1919, the API became involved in the study of petroleum measurement problems. In 1921, the API in conjunction with the U.S. Bureau of Mines and the U.S. Bureau of Standards recommended that any hydrometers used for petroleum measurement should have a scale based on the modulus of 141.5. Ever since then, such hydrometers have been known as API hydrometers, and the official designation of the hydrometer readings has been degrees API (°API).[5]