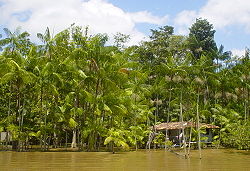 A grove of Açaí palms in Brazil

Açaí berry (pron: ah-SIGH-ee) sometimes spelled "acai berry", is the fruit of the 60-foot tall[1] acai palm tree, similar in appearance and size to a grape or blueberry but with less pulp, and which is small and round and black-purple in color and about one inch or 25mm in diameter. It is notable for controversy about possible health benefits for its supposed antioxidant properties and as a food additive, and has been the subject of disputed claims that it increases sexual performance, improves digestion, prevents cancer, and assists with weight loss. It has been the focus of several marketing scams[2] in which ads featuring celebrity endorsements or free trial offers lure in consumers into difficult-to-break contracts,[3] leading to a slew of complaints. The food was touted on the Oprah Winfrey television show in the United States by a dermatologist named Nicholas Perricone who said the berry was "one of the most nutritious and powerful foods in the world" and by Dr. Mehmet Oz as a "powerful antioxidant" which was "full of nutrients".[3]

It is grown in tropical climates such as Brazil. It's produced in branched panicles of 500 to 900 fruits. There are two crops grown per year. It has a single large seed about 0.25–0.40 inches (7–10 mm) in diameter. The exocarp of the ripe fruits is a deep purple color, or green, depending on the kind of açaí and its maturity. The mesocarp is pulpy and thin, with a consistent thickness of 1 mm or less. It surrounds the voluminous and hard endocarp, which contains a seed with a diminutive embryo and abundant endosperm. The seed makes up about 80% of the fruit. 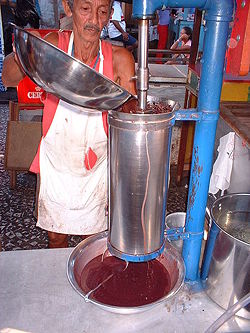 The berries are harvested as food. In a study of three traditional Caboclo populations in the Brazilian Amazon, açaí palm was described as the most important plant species because the fruit makes up a major component of their diet, up to 42% of the total food intake by weight.[4]

In the northern state of Pará, Brazil, açaí pulp is traditionally served in gourds called "cuias" with tapioca and, depending on the local preference, can be consumed either salty or sweet (sugar, rapadura, and honey are known to be used in the mix).[5] Açaí has become popular in southern Brazil where it is consumed cold as açaí na tigela ("açaí in the bowl"), mostly mixed with granola.[6] Açaí is also widely consumed in Brazil as an ice cream flavor or juice. The juice has also been used in a flavored liqueur.[7] Since the 1990s açaí juice and extracts are used globally in various juice blends, smoothies, sodas, and other beverages. It's exported as a thick pulp and sold in capsule, powder or juice form at health food stores and online.[1] 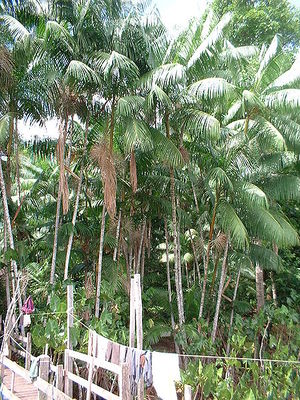 Endorsements by doctors on the Oprah Winfrey show led to a surge of interest in the product, as well as several documented marketing scams. According to one estimate, sales had risen from $435,000 in 2006 to $13.5 million (USD) by 2008.[1] In May 2009, Bloomberg News service reported that the expanding popularity of açaí in the United States was "depriving Brazilian jungle dwellers of a protein-rich nutrient they’ve relied on for generations."[8][9] The fruit's wholesale sales price in Brazil has jumped 60 times, according to one estimate.[9] The açaí berry has been marketed as a dietary supplement. Companies sell açaí berry products in the form of tablets, juice, smoothies, instant drink powders, and whole fruit. Marketers of these products have made claims that açaí provides increased energy levels, improved sexual performance, improved digestion, detoxification, high fiber content, improved skin appearance, improved heart health, improved sleep, and reduction of cholesterol levels. But these claims have been subject to controversy; Quackwatch noted that "açaí juice has only middling levels of antioxidants—less than that of Concord grape, blueberry, and black cherry juices, but more than cranberry, orange, and apple juices."

Furthermore, the extent to which polyphenols as dietary antioxidants may promote health is doubtful. No credible evidence indicates any antioxidant role for polyphenols in vivo,[10][11] but rather in minute concentrations, they may affect cell-to-cell signaling, receptor sensitivity, inflammatory enzyme activity or gene regulation.[11][12] Statements that açaí consumption affects body weight or promotes weight loss have been seriously disputed.[13]

According to the Washington–based Center for Science in the Public Interest, thousands of consumers have had trouble stopping recurrent charges on their credit cards when they tried to cancel free trials of açai-based products.[14][15] Even some web sites purporting to warn about açai-related scams are themselves perpetrating scams.[13] Apparently false claims include reversal of diabetes and other chronic illnesses, as well as expanding size of the penis and increasing men's sexual virility and sexual attractiveness to women.[16]

As of March 2009, there are no scientifically controlled studies backing up any of these claims. According to ABC News correspondent Susan Donaldson, these products have not been evaluated (in the United States) by the FDA, and their efficacy is questionable.[17] In late 2008, lawyers for The Oprah Winfrey Show began investigating alleged statements from supplement manufacturers who suggested that frequent Oprah guest Dr. Mehmet Oz had recommended their product or açai in general for weight loss.[17] 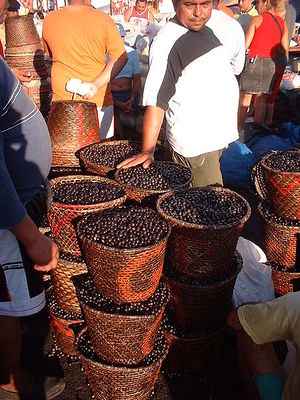 Baskets of acai berries in a market in Brazil in 2004.

The fat content of açaí consists of oleic acid (56.2% of total fats), palmitic acid (24.1%), and linoleic acid (12.5%). Açaí also contains beta-sitosterol (78–91% of total sterols).[18] The oil compartments in açaí fruit contain polyphenols such as procyanidin oligomers and vanillic acid, syringic acid, p-hydroxybenzoic acid, protocatechuic acid, and ferulic acid, which were shown to degrade substantially during storage or exposure to heat.[19]