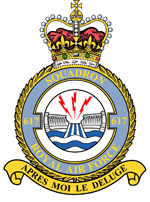 617 Squadron, "Perhaps the most famous Royal Air Force squadron currently flying",[1] was formed for a special strategic bombing mission in the Second World War, continuing in precision bombing and Pathfinder roles, and then in a variety of bombing and attack missions after the war. It remains in service, at RAF Marham, flying Panavia Tornado GR4 multirole fighters.

617 Squadron, known as the Dambusters, was formed at Scampton on 21 March 1943, originally for a single special mission: Operation Chastise, the breaching of dams vital to the German war effort.

The Squadron's Commanding Officer, Wing Commander Guy Gibson, given carte blanche to take the best personnel,in other Lancaster squadrons. Even he was not told, until just before the attacks, of the exact targets, just that low flying over water was required.

617 Squadron participated in the Battle of Normandy not by dropping bombs, but with a deception task that involved incredible precision. They flew in patterns, dropping chaff to suggest, to German radar, that the invasion fleet was approaching Cap d’Antifer, rather than the actual beaches. 16 Lancasters took part in Operation Taxable. [2]

It received Lincolns in September 1946 and English Electric Canberras six years later with which the Squadron took part in Operation Firedog in Malaya before disbanding on 15 December 1955. On 1 May 1958, No 617 reformed at Scampton equipped with Vulcans, a type that remained on strength until 31 December 1981 when the unit disbanded. The following year, the Squadron reformed with Tornado GR1s at Marham, initially in the strike role, but latterly in the maritime strike mission based at Lossiemouth.[1]

Number 617 continued to fly the Tornado GR1 until it was replaced by the updated GR4 and it was with these that the squadron carried out the first attacks with the RAF's stand-off weapon - Storm Shadow - in RAF Operation Telic during the Iraq War in April 2003.