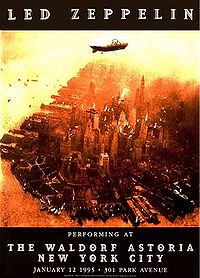 Over 1,200 paying music executives, musicians, industry personnel, family and friends attended the event, organized by the Hall's executive director Suzan Evans. The Allman Brothers Band, Led Zeppelin, Al Green, Janis Joplin, Martha and the Vandellas, Neil Young, and Frank Zappa were all inducted on the night, having met the Hall's eligibility requirement of having released a first recording at least twenty-five years prior to the ceremony. Martha and the Vandellas had been eligible for several years but failed to make earlier awards nominations. Other inductees included Paul Ackerman, a former music editor at Billboard magazine, and the Orioles, an early influence on the soul and doo-wop vocal groups of the 1950s. Nominees for the Hall were selected by a twenty-nine person panel that included producer Phil Spector; Bruce Springsteen's manager Jon Landau; Ahmet Ertegun, a founder and chairman of Atlantic Records, and Dave Marsh, a longtime rock writer and anti-censorship crusader. A ballot was then sent to 600 more writers and music-business figures, who selected the inductees, with the final recipients named on 16 November 1994.

Bob Krasnow, former president of Elektra Records, opened proceedings by quoting George Clinton's 'Free your mind and your a-will follow.' The event night included celebrity speeches, film clips and musical performances by surviving inductees and their friends, culminating in an all-star jam session. This ceremony was the first to be televised by MTV, and the last to be held at the Waldorf-Astoria hotel. Hall of Fame Foundation co-founder Jann Wenner earlier announced that the Halls' permanent museum would be opened on 1 September 1995 in Cleveland, with future ceremonies held there. Cleveland was first chosen as the site of the Rock and Roll Hall of Fame and Museum in 1986, with James Henke named as chief curator. The building, a US$92 million, eight-storey glass pyramid structure was designed by architect I. M. Pei. Although not broadcast live, MTV aired an edited two-hour version of the ceremony at 9 p.m. Wednesday 18 January 1995.[1]

Guest presenters inducted the various artists into the Hall. Natalie Cole introduced Al Green; Melissa Etheridge inducted Janis Joplin (who had died in 1970), and Lou Reed inducted Frank Zappa (who had died of prostate cancer in December 1993) with Moon Unit Zappa accepting on his behalf; Fred Schneider and Kate Pierson of the B-52's inducted Martha and the Vandellas, and Willie Nelson presented the Allman Brothers. Eddie Vedder of Pearl Jam inducted Neil Young and Steven Tyler and Joe Perry of Aerosmith inducted Led Zeppelin.[2][3] During his speech, Tyler cited influential Led Zeppelin drummer John Bonham, whose death in 1980 caused the band to break up. Perry said: 'Even today, nobody can take his place.' Bonham's children Zoe Bonham and Jason Bonham, accepted on his behalf, along with the remaining members of the band Jimmy Page, Robert Plant, and John Paul Jones. Page was previously honoured as a member of the Yardbirds in 1992. The duo of Jimmy Page and Robert Plant who appeared at the MTV reunion Unledded in August 1994, were preparing to mount their first tour together in years, in February 1995.

It wasn't until midnight, after all the tributes were completed and awards awarded, that the bulk of the show's live music performances took place. Martha and the Vandellas performed 'Dancing in the Street', Melissa Etheridge played an acoustic version of 'Piece of My Heart' and Al Green sang 'Funny' and 'Take Me to the River'. The first Led Zeppelin/Aerosmith jam featured six blues-rock songs, while their second jam without Perry and Tyler. included Michael Lee on drums, and Neil Young on guitar, during their rendition of 'When the Levee Breaks'. Plant briefly played Page's cherry red Gibson Les Paul Standard for a few chords.[4] The event concluded at 2 a.m.