A vector product, also known as cross product, is an antisymmetric product A × B = −B × A of two vectors A and B in 3-dimensional Euclidean space

Given two vectors, A and B in

where aN is a unit vector normal to the plane spanned by A and B in the right-hand rule direction.

From the antisymmetry A × B = −B × A follows that the cross (vector) product of any vector with itself (or another parallel or antiparallel vector) is zero because A × A = − A × A and the only quantity equal to minus itself is the zero. Alternatively, one may derive this from the fact that sin(0) = 0 (parallel vectors) and sin(180) = 0 (antiparallel vectors). 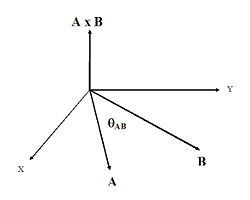 (PD) Image: D.E. Volk
Fig. 1. Diagram illustrating the direction of A×B. The plane containing A and B is the x-y plane, A×B is along the z-axis.

Another formulation of the cross product

Rather than in terms of angle and perpendicular unit vector, another form of the cross product is often used. In the alternate definition the vectors must be expressed with respect to a Cartesian (orthonormal) coordinate frame ax, ay and az of

This formula can be written more concisely upon introduction of a determinant:

denotes the determinant of a matrix. This determinant must be evaluated along the first row, otherwise the equation does not make sense.

Geometric representation of the length

because aN has by definition length 1. 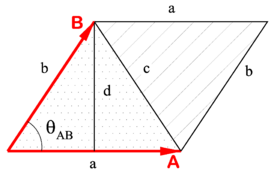 CC Image
Fig. 2. The length of the cross product A×B is equal to area of the parallelogram with sides a and b, the sum of the areas of the dotted and dashed triangle.

because, as follows from Fig. 2:

Application: the volume of a parallelepiped

The volume V of the parallelepiped shown in Fig. 3 is given by

Indeed, remember that the volume of a parallelepiped is given by the area S of its base times its height h, V = Sh. Above it was shown that, if

The height h of the parallelepiped is the length of the projection of the vector A onto D. The dot product between A and D is |D| times the length h,

It is of interest to point out that V can be given by a determinant that contains the components of A, B, and C with respect to a Cartesian coordinate system,

From the permutation properties of a determinant follows

Given a fixed vector n, the application of n× is linear,

This implies that n×r can be written as a matrix-vector product,

The matrix N has as general element

where εαβγ is the antisymmetric Levi-Civita symbol. It follows that

The rotation of a vector r around the unit vector

over an angle φ sends r to r′. The rotated vector is related to the original vector by

Suppose now that φ is infinitesimal and equal to Δφ, i.e., squares and higher powers of Δφ are negligible with respect to Δφ, then

; it is known as the generator of an infinitesimal rotation around

. This antisymmetric subspace is of dimension 3.

In general the antisymmetric subspace of the k-fold tensor power

. Elements of such space are often called wedge or exterior products written as

The latter number is equal to 3 only if n = 3. For instance, for n = 2 or 4, the antisymmetric subspaces are of dimension 1 and 6, respectively.

Hence, if one regards the vector product in

from the point of view of antisymmetric subspaces, it is a "coincidence" that the product lies again in

The very first textbook on vector analysis (Vector analysis: a text-book for the use of students of mathematics and physics, founded upon the lectures of J. Willard Gibbs by Edwin Bidwell Wilson, Yale University Press, New Haven, 1901) can be found here. In this book the synonyms: skew product, cross product and vector product are introduced.