Texas was an independent republic when it voted to join the United States of America as the 28th state, entering officially on December 29, 1845. The capital is located in Austin. The state motto is "Friendship" and its nickname is the "Lone Star State," a reference to its flag when it was independent. The largest metropolitan areas are Houston, Dallas-Fort-Worth, and San Antonio. [1] The population of 22.9 million in 2006 makes Texas second to California; it contains 12 million people belonging to a minority group, including 8.4 million Hispanics and .882 million blacks, xx million Asians, as well as 11.4 million non-Hispanic whites.[2]

see Texas, history Six national flags have flown over Texas. Spain, France (which had a small brief settlement), Mexico, the Republic of Texas, the Confederate States of America, and the United States of America have ruled Texas. [3]

Spain sent in several exploration teams, but they found no gold and gave negative reports that warned about the arid land and the hostile Indian tribes. Spanish settlers moved to New Mexico instead.

Spain opened a mission at San Antonio in 1718 along with several small missions and military outposts, primarily to keep France from expanding from its base in Louisiana. Spain began issuing permission for American settlement, but was replaced by Mexico in 1821.

In January 1821, the Spanish authorities in Mexico City granted American Moses Austin permission to settle 300 families in Texas. After the death of Austin and after Mexico's successful revolt against Spain, the Mexican provisional government confirmed this concession to Stephen F. Austin, the "Father of Texas." The younger Austin obtained contracts to settle 900 additional families, most of whom arrived by 1833. Austin's colonies formed the nucleus of the American settlements in Texas. 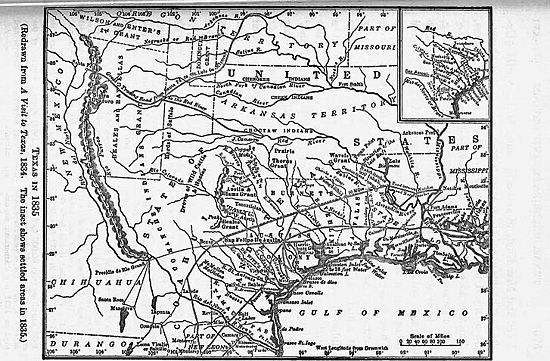 Texas leaders gathered at Washington-on-the-Brazos to sign the Texas Declaration of Independence on March 2, 1836. Four days later the Alamo fell after a 13 day siege by Mexican troops led by Gen. Antonio López de Santa Anna. The massacre of all the defenders gave rise to the rallying call "Remember the Alamo". Santa Anna's Mexican troops were defeated on April 21 at the Battle of San Jacinto near present-day Houston. Mexico, however, refused to recognize the independence and when Texas joined the U.S. in 1845, the Mexican American War became inevitable. Texas was a favorite destination of German immigrants in the 140s and 1850s.

Texas joined the Confederacy March 2, 1861-March 15, 1865. The coast was blockaded, and after the fall of Vicksburg in 1863 it became almost impossible to send men, horses or cattle to the east. Texas became a backwater with little military action.

December 29, 1845-March 2, 1861 and March 15, 1865-present. Legally Texas was never out of the Union, and its Reconstruction experience was similar to other rebel states. Texas was hardly damaged by the war, and attracted a large number of immigrants from the deep South after 1865, while few Europeans arrived.

The natural environment of Texas is as diverse as its history. The natural areas of Texas can be described in many ways including the following ten descriptive names: the Gulf of Mexico Coastal Prairies and Marshes, the East Texas Pineywoods, the Post Oak Savannah (stretching from the Oklahoma border down through Central Texas), the Blackland Prairies (paralleling the Post Oak Savannah), the North Texas Cross Timbers and Prairies, the North Texas/Texas Panhandle Rolling Plains, the Texas Panhandle/West Texas High Plains, the West Texas Trans-Pecos (including the mountains of Texas), the Central/Western Texas Edwards Plateau, and the South Texas Plains.[1]

The weakness of education in Texas has always (and still is) an important priority. The Texas Declaration of Independence from Mexico included the following grievance against the government of Mexico pertaining to education:

It has failed to establish any public system of education, although possessed of almost boundless resources, (the public domain,) and although it is an axiom in political science, that unless a people are educated and enlightened, it is idle to expect the continuance of civil liberty, or the capacity for self government.

Even today Texas is in the forefront of education in the country as the No Child Left Behind( NCLB) Act is being implemented. The administration of George W. Bush used Texas as a model for many of the reforms in the NCLB Act because of his previous experiences as governor of Texas.

The University of Texas System and the Texas A&M System are two of the largest higher education systems in the nation, with numerous branch campuses. The University of Texas at Austin is the largest institution in the UT System, while Texas A&M is the flagship of the rival system. Thanks to ownership of oil fields, their endowments in 2006 reached $13.2 billion and $5.6 billion. The best endowed private schools were Rice University in Houston with $4.0 billion, Southern Methodist University in Dallas ($1.1 billion); Baylor College of Medicine ($1.0 billion), and Texas Christian University in Ft. Worth ($1.0 billion). 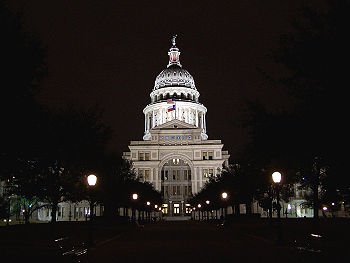 (CC) Photo: Larry D. Moore
The Texas State Capitol, Austin. The Capitol was added to the National Register of Historic Places in 1970 and was recognized as a National Historic Landmark in 1986.

The current Governor of Texas is Republican Rick Perry. Perry was Lieutenant Governor in 2000 when George W. Bush resigned as Governor to become the 43rd President of the United States of America. Two U.S. Senators representing Texas are Kay Bailey Hutchison and John Cornyn, both Republicans.

After Reconstruction Texas was a part of the Solid South that almost always voted for the Democratic nominees. The first major Republican was Senator John Tower, elected in 1961. In the Civil Rights movement of the mid-20th century, Texan Democrats such as Barbara Jordan and President Lyndon B. Johnson played a significant role in the domestic reform policies in that period. Later, however, along with the rest of Southern United States, Texas moved to right and increasingly voted for the Republican Party. The last Democrat to win a statewide office, Ann Richards, was elected governor in 1990 but was defeated by George W. Bush in 1994. In recent years Texas has become a stronghold for Republicans and a national bastion of economic conservatism.