How come the parrot article is all full of cockatoos? 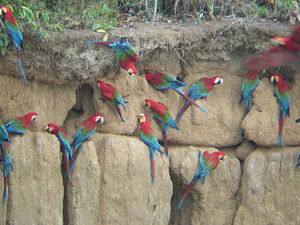 This one is way cool. It should be included either here or at Macaw.

Nice shots but those are still cockatoos!

If the article is going to remain as short as it is, that seems right.
I'm not convinced that it should stay as short as it is though. From a biology standpoint, it's probably sufficient as it is but try to imagine the reasons that someone might look up "parrot." I imagine that most of the people visitng this page will want to know more about "what parrots are like" and "where I can go to see some parrots" and "why parrots are so colorful." Most of that information will probably appear in the articles for specific species, but it also needs to be condensed somewhere that casual searchers can find it. --Joe Quick 20:03, 21 October 2007 (CDT)

Joe, all parrot specific information will be under Psittacidae, while all information about cockatoos will be under that group. So, it won't be under each species specific. Kim van der Linde 11:28, 22 October 2007 (CDT)

Oh, okay, I see now. I should have been able to figure that out from the text. Wouldn't it make more sense for this article to point to Psittacidae with a short disclaimer (not so different than the current text) in the opening that explains that the term "parrot" may also be used to refer to the order? I assume that I'm still missing something obvious here. Thanks for your patience. :-) --Joe Quick 11:45, 22 October 2007 (CDT)

O, if you do that, you most likely get others who say that you have to point Parrot to the order Psittaciformes.Kim van der Linde 15:03, 22 October 2007 (CDT)

How about describing aspects of parrots that make for good or bad pets. What kind of diet should one feed to parrots? How long do parrots live on average and are some varieties longer-lived, quieter, like people more. etc. David E. Volk 15:32, 13 November 2007 (CST)

More meat in the linled pages

The images are great, but if the pages it links to are more developed, then this stubby pages would work well.