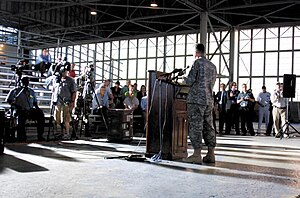 Steven David addresses the Press, following a hearing, at Guantanamo, on June 5th, 2008.

Steven David is a military officer and lawyer.[1][2][3] He is a Colonel in the United States Army Reserve. He served as a Chief Defense Counsel for the Office of Military Commissions the body authorized to conduct the military commissions to try Guantanamo captives. In October 2010 he was appointed a Justice of the Indiana Supreme Court.

In 2008, while he was serving as Chief Defense Counsel, David complained that the Defense branch of the Office of Military Commission had not been allocated sufficient resources.[4][5][6][7]

According to The Times David called for the entire military commission system to be scrapped, following the conviction of Osama bin Laden's driver, Salim Ahmed Hamdan, in August 2008.[8] He was critical of the way the commission had relied on hearsay evidence, secret testimony, and that evidence of abusive interrogation had been suppressed.