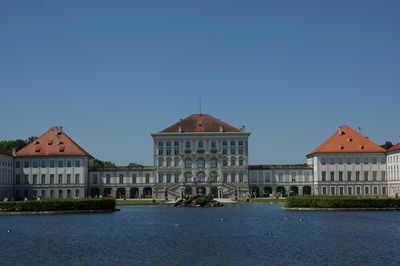 Schloss Nymphenburg (Nymphenburg Palace) is a rococo style palace located on the outskirts of Munich. It was commissioned by Elector Ferdinand Maria of Bavaria in 1663 as a gift for his wife, Adelaide of Savoy, in celebration of the birth of his son and heir, Max II Emmanuel. The palace was located 6 kilometers outside of Munich when it was originally constructed, but is now located within the city limits. The palace functioned as the summer residence of the Wittelsbach family in Munich, and was the birthplace of King Ludwig II of Bavaria. The extensive park complex associated with the palace contains four pavilion buildings, the Amalienburg, Badenburg, Pagodenburg, and The Magdeleneklause.