Rugby union is a team game, one of the two main varieties of rugby football. It is played by 15 players on each side, on a grass pitch, with an oval ball. Points are scored by a "try" - touching the ball to ground after crossing the opponent's touchline.[1] A try is worth 5 points, and another two may be added if the try is converted - a conversion means kicking the ball from the ground between two vertical posts at the mid-point of the touchline, and above the cross bar that connects them, from a kicking position in line with the point at which the ball was touched down for the try. There are two other ways of scoring points - a penalty goal worth three points is scored when such a kick is made successfully from the place at which an offence has been committed, resulting in the referee awarding a kick at goal as penalty. A drop-goal can also be scored at any time - in this case the ball must be dropped from hand to the ground immediately before it is kicked over the crossbar.

Rugby union is an aggressive contact sport, played without any physical protection for the players. Teams are a mixture of strong, heavy forwards and lighter, fast-running backs, and the ball is moved downfield by either running with the ball in hand or by regaining the ball after a kick ahead; the ball may not be passed forward from hand, but can be passed back. In rugby union, "earning the right to go wide" generally means keeping possession with the heavier forwards through successive phases of play, taking the ball progressively downfield towards the opposing touchline. This tactic "wraps up" the opposition in defence in the centre of the field, and needs solid, hard "grunt" work - aggressive running by the forwards in short bursts. When tackled, usually by other forwards, the player in possession must recycle the ball quickly, either by a short pass out of the tackle to another player - usually another forward - or by ensuring that his team regains possession after a tackle by placing the ball behind his body as he is tackled so that his teammates can win the ball back from the ensuing ruck. Each forward in turn will try to 'break the gain line' before being tackled, so moving the ball slowly downfield.

To counter this, the defence must tackle aggressively - trying to loosen the ball in the tackle, and to push the forward back in the tackle so that he falls behind the ball; this is physically exhausting, and draws defenders into the 'breakdown'. The breakdown is the phase of play when the ball falls to ground after a tackle. The defenders will seek to ensure that, by outnumbering the offence at the breakdown, they have a chance of 'turning over possession'.

While the forwards steadily gain ground, the half-backs, who direct the overall team tactics, patiently wait for gaps to appear in the defensive line as defenders are drawn out of position. When an opportunity arises, the half-backs will pass the ball quickly out to the fast-running backs who can, if they are fast and skillful enough, exploit them. In rugby union, the ball cannot be passed forward, so moving the ball to the backs means a loss of territory that must be regained by running in space.

Play stops when the ball leaves the field of play across a sideline, and is restarted by a "line-out". In this set piece, the throw in is given against the side that was in possession when the ball crossed the sideline. The ball is thrown in from the touchline between two opposing lines of players, who jump for the ball (with assistance from their team mates, who may lift them). The side "throwing in" has a clear advantage, as by signal or pre-arranged plan the team taking the throw-in will know who the intended recipient of the throw is.

Play also stops when a minor offence has been committed - usually when the ball is knocked forward unintentionally. Play is then re-started with a scrum, when the forwards of each team link arms and crouch down to push against each other while the ball is introduced beween them. Again the side introducing the ball into a scrum has the advantage, and this is given to the side that was not responsible for the stoppage.

A rugby team has 15 players: eight forwards and seven backs.

The forwards The 'front row' comprises two prop forwards and a hooker. This is the front line of the scrum; the two prop forward are specialised "pushers" and are normally very large and powerful; it helps to have no neck and no ears. The hooker is slighter than these (but still large). The hooker is a highly specialised position; there is a risk of very serious injury if the scrum collapses, and only trained specialists may play in the front row because of this risk.

The 'second row' comprises two tall lock forwards; these are the main jumpers for the ball at line-outs. Behind them in the scrum is the "number 8" forward, usually the biggest of all. On either side of the scrum are the loose forwards (numbers 4 and 7); also called "breakaway forwards", these are the quickest of the forwards; they are the first to leave a scrum, and one of their major jobs is to harass the opposing half-backs.

The backs Behind the scrum are the two most important positions in a rugby union side - the half-backs. the scrum half (number 9) is the player who will receive the ball from a scrum and pass it on or kick; he is also usually the player who will distribute the ball after it has been won in a ruck. If the scrum half decides that it may be possible to gain ground by moving the ball through the backs, the recipient of his pass will be the fly half (number 10), often the slightest player in the team. However, the scrum half may have to take the ball forward himself, usually running forward into a tackle and passing it back to his forwards.

The fly half is the major tactician in the side, who will judge whether to kick for space, move the ball on through the backs, or return it to the forwards. He must be able to kick long and accurately from hand, and is usually the team's place kicker. He must be calm, he will always be the focus of aggressive attention from the opposing loose forwards so it helps to have a massive sidestep; how much time he has on the ball will depend on the speed, length and accuracy of the passes he receives from the scrum half.

If the fly half passes the ball along the line, it will usually pass through the inside centre (number 12) to the outside centre (number 13) and then to one of the wings (numbers 11 and 14). The centres have two main attacking tactics - the crash ball - running straight at speed with ball into a tackle, hoping to break the tackle by speed and power, and the break - running at speed between two players in the opposing line. They also however have a key role in defence; they will make a lot of tackles in a game, both on opposing forwards and backs. The wingers generally need space in which to run with the ball, enabling them to beat defenders by rapid changes in running direction.

Behind these is the full back (number 15). The last line of defence, he must be able to catch high kicks even when opposing players are travelling at speed towards him; he must be able to kick long, tackle well and must have a good sense of position. The full back can also be a potent attacking weapon, entering the line at unexpected times running at speed from different angles, a running full back can wreck a defensive line - but risks leaving his own line undefended. JPR Williams, full back for Wales in the 1970's, was the epitome of the attacking full back.

Tactical decisions during a game are usually made by the half backs, especially the fly half, and must be moulded to the relative positional strengths of the teams and to the conditions. The outcome of a given rugby much is often unpredictable, as a single weakness in a good side may be exploited by an opposition that is, on paper, weaker overall. For example, if one team establishes superiority in line-outs, because they are out-jumping the opposition or more accurate in timing the throw in, then the fly half may choose to often kick long into touch, knowing that there will be a good chance of regaining possession at the resulting line-out. He cannot kick directly into touch however - the ball must bounce in play first, so his kicking must be accurate. If the opposing full back looks lacking in confidence when catching high balls, the fly half may kick high at him, timing his kick to allow his forwards to reach the ball as the full back is about to catch it. If players on the other side are out of position, he may kick into the spaces that are left on the field.

Different teams tend to have very different balances of strengths and weaknesses. The England team, very successful through the 1980's, had very large powerful forwards, disciplined and well organised, and a good kicking fly half - Johnny Wilkinson.[2] Successful Welsh teams by contrast have relied on the inventive and elusive running of light, fast backs led by brilliant half backs; in the 1970's Gareth Edwards[3] was scrum half, and first Barry John[4] and then Phil Bennett[5] played fly-half. Ireland has tended to play with aggressive, hard-tackling, fast running loose forwards and centres. New Zealand cheats, by producing large, strong, fast running and elusive players in just about all positions such as Jonah Lomu, a 29 stone (125 kg) winger who could run 100 m in 10 seconds.[6] Fiji became famous for open rugby, passing between forwards and backs who spread out widely across the field of play, difficult to defend against but very vulnerable to counter-attack. France is predictably unpredictable, at their best playing the best open rugby in the Northern hemisphere, at worst, trying unsuccessfully to match the discipline and organisation of the English forwards.

In the southern hemisphere, the major rugby-playing nations are New Zealand, Australia, South Africa and Argentina. Tonga, Fiji and Western Samoa also have national teams. In the northern hemisphere, the main rugby nations are France, England, Italy, Wales, Ireland and Scotland (who all compete in the Six Nations Championship). Rugby is also popular in Japan and Canada.

South Africa are the current world champions - holders of the Rugby World Cup, which is competed for in a tournament held every four years. South Africa beat Argentina in the 2007 final. 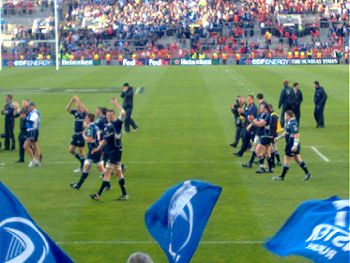 In the northern hemisphere, since 1995, club teams from France, England, Italy, Wales, Ireland and Scotland have competed for the Heineken Cup. The current holders are Leinster. On 2nd May, 2008, the world record for attendance at a club rugby game was broken when 82,208 supporters watched Leinster beat Munster 25-6 in a Heineken Cup semi-final at Croke Park, Dublin.[7] Leinster went on to win the 2009 competition, beating Leicester Tigers 19-16 in the final, played in Murrayfield on 24th May, 2009.