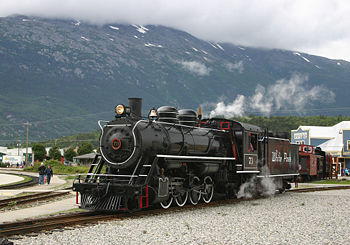 A railroad or railway is a mode within a transportation system. It comprises both a technological system and a business organization for transporting passengers and freight.

In all cases, the terms railroad and railway appear to be interchangeable, although historically or geographically, one term may have been more popular than the other at particular times or in particular regions.[1] The term was adopted to differentiate this type of roadway from others principally because this technology used vehicles riding on rails (beams laid end-to-end in the direction of travel across stringers or other foundation). All that is required is the use of the rail as the vehicular support. The number of rails is often irrelevant in qualifying a roadway as a railroad. Thus systems using one (monorail), two, or even three rails (as in dual-guage systems, third-rail electric railroads, or cog railroads) qualify as railways. As railroad businesses evolved and developed -- and re-organized -- they sometimes changed only the rail term, going from being called a railroad company to a railway company (or vice versa) although such a change in title meant no change in technology, business structure, or route.

The first railways were built in the United Kingdom, and were powered by horses, although steam locomotion replace animal propulsion within a matter of a few years. Steam railroads are still in use in some countries with older rolling stock, or on heritage lines that transport tourists. Typically, railway vehicles are connected together in "trains". Traditionally, the leading (sometimes trailing) vehicle, or vehicles, is a locomotive, the vehicle with the engine that powers the whole train. However, on modern trains each carriage is identical and can stand alone or at any point in the train. In the twentieth century, diesel, or diesel-electric, started to replace steam engines for long-range use.

At the present time, railroads are most effective as a means of carrying large amounts of cargo. In less developed areas, they may be very viable alternatives to highway construction for individual transportation, and they also, as in England, are attractive alternatives to short-haul air transport. Specialized railroads can be critical parts of urban mass transportation systems.

For long-distance passenger transport, however, airlines have displaced rail travel in many areas.

For most of the history of rail transportation the vehicles traveled on parallel pairs of steel rails. The rails are attached to sleepers, which rigidly hold the rails at a fixed distance from one another. The sleepers, in turn, rest on specially prepared beds, often of gravel, which prevent the great weight of the train from sinking into the ground.

The speed at which a train can travel depends on the effort and precision into laying out the track. Very high speed trains run on track laid out with more precision, with more gentle curves. The track on curves is often gently banked.

The wheels rail vehicles travel on have a large inner flange, that rests inside the rails. Because the pairs of wheels on either track are connected with a fixed axle the surface of the wheels that makes contact with the rails are very slightly conical. This allows the vehicles to round curves more easily. When rounding a curve the inner wheel traverses a slightly shorter path than the outer wheel. If the rolling surface of the wheels was of a constant diameter one of the two wheels would have to wastefully and inefficiently slip. However, the conical rolling surface allow the inner wheel a curve in the track's path to roll on a cross-section of the wheel with a slightly smaller diameter than the cross-section the outer wheel is rolling on.

The tracks are also designed to avoid rapid changes of grade. Rises of more than 2 percent can be dangerous, and require extra locomotives.

To avoid dangerous grade changes railways often employ tunnels through mountains. Tunnels are extremely expensive to construct. The route the Canadian Pacific Railway employs to cross Kicking Horse Pass uses spiral tunnels to circumvent an older route that had a section with a dangerously steep slope.

A funicular is a specialized kind of rail vehicle specially designed to climb steeper grades. They sometimes have a third rail, with gears.

Gauge defines the spacing between the rails, and the dimensions of the rails themselves.

Almost all railroads in North America, and Europe now use "standard gauge" track, where the rails are 1,435 mm apart. Two exceptions are the Alaska Railway, a narrow gauge heritage railway. It was originally built to transport treasure-seekers with the Klondike during the Klondike gold rush. The Toronto Transit Commission was designed to use a gauge slightly larger than standard gauge, so vehicles of the long distance railways could never use them.

Railways using smaller narrow gauges continue in use in Africa, and various other regions. They can be cheaper to build. They often travel at slower speeds, on track laid out with less precision, and with more lightly constructed railbeds. Consequently they can carry lighter cargo loads.

Trains in the former Soviet Union and several other use a larger broad gauge.

A break of gauge is the intersection of railway networks with different gauges. Different mechanisms are used to deal with a break of gauge:

Railroads employ a variety of specialized vehicles. Conventional railroads use locomotives to pull (or sometimes push) unpowered cars. Some modern systems have powered cars, or complex car-track interaction systems such as magnetic levitation.

Locomotives apply the mechanical energy required to move the other, unpowered cars of a train. The first were steam-propelled, and a coal tender to carry the fuel that fired their engines, as well as water supplies along the routes. Most conventional locomotives are diesel-electric, or use electric power from an external source.

The caboose, (alternatively guard van) was a small car where the conductor would have his office. Typically the caboose was the last vehicle in the train, and staff on board the caboose would observe the rest of the train for problems.

Boxcars are enclosed vehicles used to carry cargo. Variants may be refrigerated, be ventilated to carry livestock, etc.

Hopper cars, also called godolas, are open-topped vehicles used to transport bulk material like coal or ore. They are loaded from the top and usually unloaded through trapdoors in their bottoms.

Passenger car are vehicles with seats for carrying passengers. Some long distance passenger cars have small rooms with beds for overnight trips. Some modern passenger cars are two stories tall.