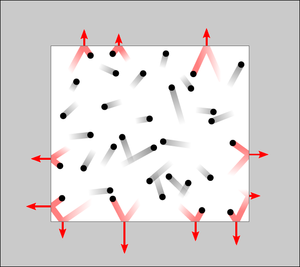 (CC) Diagram: Brant Carlson
Illustration of the forces exerted by atoms or molecules colliding with the inner walls of a container. Collisions and the resulting forces are shown in red. Pressure is the sum of the collisional forces.

Pressure (symbol: p) is the force applied over an area in a direction perpendicular to the surface of the area.

Pressure is a natural physical phenomenon. It is a scalar quantity and a fundamental parameter in thermodynamics.

Mathematically, pressure may be expressed as:[1]

is the perpendicular force

Example reading:  1 Pa = 1 N/m2  = 10−5 bar  = 9.8692×10−6 atm  = 7.5006×10−3 torr, etc.
Note: mmHg is an abbreviation for millimetre of mercury
About the torr: There is no consensus in the technical literature about whether the name of the torr should be "Torr" or "torr". Nor is there any consensus about whether the symbol for that unit of pressure should be "Torr" or "torr". Both the United Kingdom's National Physical Laboratory (see Pressure Units) and New Zealand's Measurement Standards Laboratory (see Barometric Pressure Units) use "torr" as the name and as the symbol. An extensive search of the website of the U.S. National Institute of Standards and Technology found no such clear-cut definitions. Therefore, this table uses "torr" as both the name and the symbol. 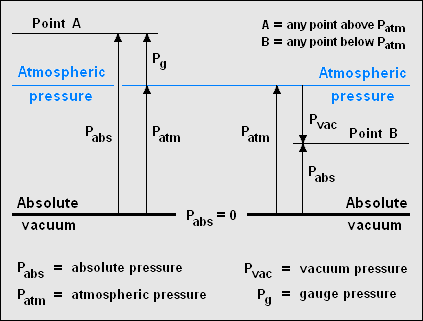 In technical writing, this would be written as a gauge pressure of 220 kPa or as an absolute pressure of 321 kPa. Where space is limited, such as on pressure gauge dials, table headings or graph labels, the use of a modifier in parentheses, such as kPa (gauge) and kPa (absolute) or kPa-gauge and kPa-absolute, is strongly encouraged.[2][3] Gauge pressure is also sometimes spelled gage pressure. This discussion of modifiers also applies to other pressure units such as bar, torr, atmosphere, etc.

A statement such as the system operates at a vacuum of 100 torr will lead to confusion because it might mean an absolute pressure of 100 torr or a pressure of −100 torr (i.e., 100 torr below an atmospheric pressure of 760 torr).

A finger can be pressed against a wall without making a lasting impression; however, the same finger pushing a thumbtack can easily make a small hole in the wall. Although the force applied to the surface is the same, the thumbtack applies more pressure because the point concentrates that force into a smaller area.

If one is at the bottom of a deep pool of water, the water pressure will cause pain in one's ears. That pain cannot be relieved by turning one's head. The water's force on your eardrum is always the same, and is always perpendicular to the surface where the eardrum contacts the water.