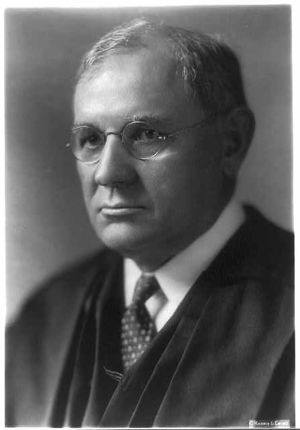 Pierce Butler (1866-1939) was an American jurist who served as an Associate Justice on the U.S. Supreme Court from 1923 until his death in 1939. Butler was born in Minnesota. He was best known for being one of the "Four Horsemen", a group of ultra-conservative justices who consistently voted to strike down Franklin D. Roosevelt's New Deal programs, and his lone dissent in the notorious case Buck v. Bell, along with his other unusual dissenting opinions. Prior to his tenure on Supreme Court, he was a railroad lawyer.

Butler was appointed by President Warren G. Harding and took office in 1923. He was a Roman Catholic, a Democrat, and a political conservative. On the bench, with the other three justices in the "Four Horsemen" faction he opposed governmental regulation of businesses. The four justices together temporarily blocked many of FDR's programs until Owen Roberts's switch of views and the arrival of Hugo Black. He was also very conservative on the issue of race, being a dissenter in the case Powell v. Alabama, the famous "Scottsboro" case. He authored the majority opinion on Breedlove v. Suttles, upholding the practice of poll tax as a qualification for voting. On freedom of speech, he had a narrow view on First Amendment, and dissented in Stromberg v. California, arguing that the ban on display of red flag should be upheld.

However, sometimes Butler wrote opinions that were favorable to individual rights. The most memorable would be his silent and lonely dissent in Buck v. Bell, the case that upheld coercive sterilization. Some argue his dissent in Buck v. Bell was due to his Catholicism. He was again the lone, silent dissenter in Palko v. Connecticut, a case that denied the protection against double jeopardy in state trials. In Olmstead v. United States, the court upheld wiretapping and Butler joined with the liberal justices in dissent.

When Butler died in 1939, in an address before the court, then-Attorney General Robert H. Jackson described him as "one of the most firm and steady men I have known", and said "his character was shaped by a hard way of life that left lasting convictions and attitudes in men who experienced it."

He should not be confused with another Pierce Butler, a Founding Father of the United States from South Carolina.