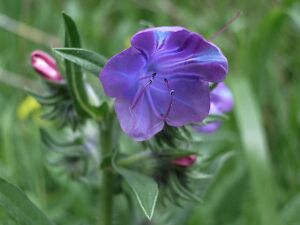 Echium plantagineum is a hardy, fast-growing flowering plant known to millions of Australians as Patterson’s Curse or sometimes Paterson’s Curse. Alternate names include Salvation Jane and Riverina Bluebell. Introduced for the loveliness of its bluish-purple flowers, it quickly took hold in the hospitable Australian climate. Patterson’s Curse has now become naturalised, and is classed as a noxious weed over most of the continent. “The weeds numbers and distribution must be reduced annually. Sale, propagation and wilful distribution of Paterson’s Curse is an offence.” [1] Patterson’s curse should be sprayed at rosette stage or before flowering for effective control.

Patterson’s Curse is bad for horses and other livestock and can cause liver failure. Animals can be poisoned from eating the weed directly or remnants of it in cut hay. Fortunately, the plant is not very palatable and horses tend to eat it only when they have no other feed. [2]