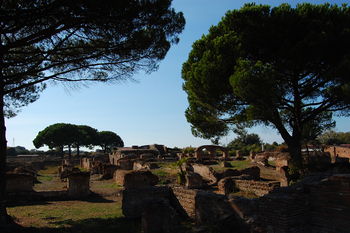 The Roman port city, Ostia, was founded in 338 B.C. and acted as the port of Rome. The port lay on the west coast of Italy, where the River Tiber flowed into the Thyrrenian Sea. Though the settlement flourished in the 1st century, it gradually lost importance as other ports were foudned to serve the capital of the Roman Empire, and by the 4th century Ostia was in a state of decay.[1]

A monumental statue stood at the mouth of Ostia's harbour, emulating a fashion for such displays in the ancient world, as established by the Colossus of Rhodes.[2] The port of Rome was also influenced by another Wonder of the Ancient World: the Lighthouse of Alexandria. Ostia, and many other harbour towns, had a lighthouse with a design similar to that at Alexandria, which was built in the late 4th century B.C.[3]