From Citizendium
Revision as of 11:58, 15 August 2013 by imported>Richard Nevell (Think this might be a more interesting angle for a photo)
(diff) ← Older revision | Latest revision (diff) | Newer revision → (diff)
Jump to navigation Jump to search 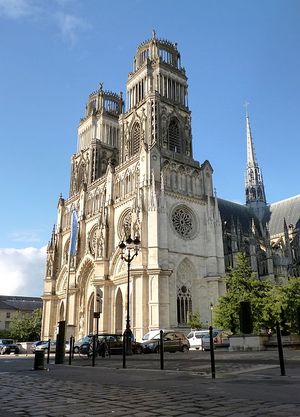 The facade of Orléans Cathedral

Orléans Cathedral (also known as the Cathédrale Sainte-Croix) was built in the late 10th century, and has since been remodelled multiple times. In 987, Orléans became a royal city, and the construction of the cathedral was patronised by Hugh Capet; building work lasted for more than a century. The importance of the city rivalled that of Paris. The medieval city was severely damaged during the Hundred Years War with England and the Wars of Religion.[1][2] In 1599, work began on rebuilding the cathedral and was commissioned by King Henry IV. However, this was not complete until the 19th century.[3]

Since 1862, the cathedral has been designated a monument historique, one of 156 such sites in Orléans and is amongst the oldest of them (especially since few of the city's medieval buildings survive). The cathedral Sainte-Croix is owned by the French state and open to the public.[4][5]