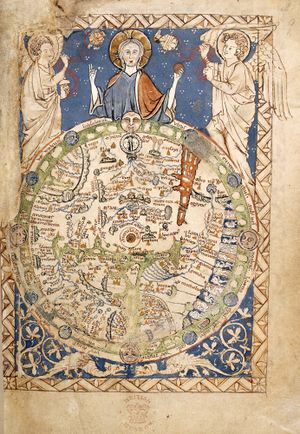 A 13th-century map of the world, held by the British Library.

The Middle Ages were a period in European history lasting roughly from the decline of the Roman Empire in the 5th century to the beginning of the Renaissance around 1500. Middle refers to their position between the ancient and modern worlds.

The periodization of the Middle Ages is an occasionally contentious, sometimes complicated question. Conventionally, the boundaries of the Middle Ages went from the year 476 (when Romulus Augustus was deposed by his general Odoacer) to somewhere around the year 1500.

Within the Middle Ages, setting internal boundaries is less controversial. The Early Middle Ages lasted from 476 until the year 1000. The term Dark Ages, which is very seldom used in modern scholarship, might be applied with the most precision to this period of time.

Though the year 1000 is arbitrary – and any historical periodization will be – certain significant changes can be seen in Medieval culture at about this time. It is around this time that an improvement can be discerned in many cultural and political aspects of life. In particular, many of the things that characterize the Middle Ages in the popular imagination begin to take their familiar forms – knights, castles, and the medieval university. Furthermore, many modern scholars believe that the climactic changes in Western Europe (the Medieval Warm Period) and consequently increased agricultural production played an important role in these cultural changes.

The year 1300 is more arbitrary than the year 1000, but following 1300 a series of disasters befell Western Europe. Bad weather led to famine in the years after 1314, and in 1347 and following the Black Death (or Black Plague) began to spread through Western Europe. The Late Middle Ages are given an arbitrary end date of 1500.

In considering the central events of the Late Middle Ages though, a paradox arises. To take one example, two of the central figures in the Italian Renaissance, Petrarch and Giovanni Boccaccio, are also two important primary sources in analyzing the Black Death. Which period, then, do they belong to – the Late Middle Ages or the Italian Renaissance?

It is probably best to understand this overlap in periods as a result of the historical development of the different academic disciplines which take the Italian Renaissance/Late Middle Ages as their field of study. Historians are loath to setting sharp boundaries between historical events which develop gradually, and so see the development from the High to Late Middle Ages incrementally. Other disciplines, and in particular art history, see cultural changes more discretely, and to some extent teleologically. Art historians see a drastic change from earlier medieval artists to the refined perspective and naturalistic concerns of Michelangelo, Rafael and Leonardo da Vinci. These disciplinary differences can be seen as a difference in emphasis.

Renaissances and the Middle Ages

By comparison with the features of the Italian Renaissance, scholars have come to see cultural revitalization in several periods of the Middle Ages. In 1927, Charles Homer Haskins made the first move in this direction by writing his influential book The Renaissance of the Twelfth Century, in which he praised the high cultural achievements of 12th-century Europe.

Scholars of the Carolingian period picked up on the cultural improvements in their period, too, with the result that the eighth and ninth centuries are occasionally called the 'Carolingian Renaissance'.

In Art History, as well, and in particular in the study of the outward expansion of techniques and concerns of Italian Renaissance painters, the term 'Northern Renaissance' is used to describe such artists as Jan van Eyck and Albrecht Durer.