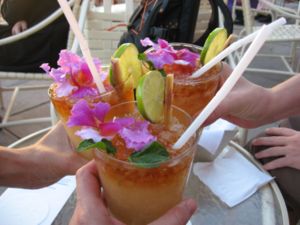 Mai tais at the Halekulani Hotel in Honolulu

The mai tai is a well-known rum-based cocktail most probably created by Victor J. Bergeron at his Trader Vic's restaurant in Oakland, California, in 1944. Trader Vic's amicable rival, Don the Beachcomber, claimed to have created it first in 1933 at his own newly opened little bar in Hollywood, which later became a famous restaurant.[1] Trader Vic's recipe is far less complicated than that of the Beachcomber and tastes quite different. [2]

"Maita'i" is the Tahitian word for "good." The spelling of the drink, however, makes it into two words. [3]

The Trader Vic story of its impomptu invention is that Bergeron created it one afternoon for some friends who were visiting from Tahiti. One of them tasted it and exclaimed, "Maita'i roa!", a common Tahitian phrase that means, literally, "good very!" and, figuratively, "Terrific!" or "Out of this world!"[4]

Mai tais have become the iconic drink of the Hawiian tourist business and there are today many recipes for it. At the Trader Vic's restaurant chain, which has remained in uninterrupted business since the 1930s, three different recipes for mai tais have been used over the years, with today's drink apparently being less sweet than the original."[5] One of the main differences between any of the Trader's recipes and that of Don the Beachcomber is that the former uses orgeat, an almond-flavored syrup, while the latter uses falernum, a syrup from the Caribbean with a very different ginger and lime flavor. The recipes from almost all other sources specify orgeat.

Mai tais should not be confused with Maotai, or Moutai, which is a well-known Chinese liquor.

The first recipe is supposely that of Don the Beachcomber. The next three are different versions provided by Trader Vic's to The Search for the Ultimate Mai Tai website. The last three are examples of the innumerable versions available throughout the world.

This version, from a book written several years after the Beachcomber's death, is apparently close to what was served in at least his Hollywood restaurant. It can be garnished with various fruits, as with all the other recipes. Falernum, which is now difficult to obtain in the United States except from a single supplier, is a flavored Caribbean syrup with a very different taste from the Orgeat syrup used in most of the other recipes. Some optional water has been added to this drink but it is still extremely strong and should be drunk in moderation.

Preparation:
Shake all the ingredients in a shaker with ice and strain into a tall highball glass filled with crushed ice. Garnish with fruits and serve with a straw.

This recipe is supposedly very close to what Trader Vic's restaurants apparently serve today, having been modified to be somewhat less sweet:

Shake all the ingredients in a shaker with ice and strain into an old fashioned glass over crushed ice. Garnish with fruits and mint, and serve with a straw.