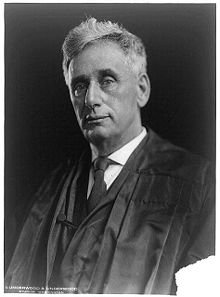 Louis Dembitz Brandeis (1856-1941) was a highly influential American lawyer and theorist of Antitrust during the Progressive Era. He was a leading liberal on the Supreme Court (1916-1939), and a leader of the Zionist movement.

Brandeis was born in Louisville, Kentucky, on Nov. 13, 1856, the son of German-Jewish intellectuals who fled Prague following the abortive revolutions of 1848. The family was active in Republican politics. His parents were secular and Brandeis was not active in religious affairs. After schooling both in the United States and in Germany, Brandeis entered Harvard Law School in 1875, where he entered into the dialectics of the new case system of instruction, inaugurated by Professor Christopher C. Langdell. After graduation in 1877 and an additional postgraduate year, Brandeis started practice in St. Louis, then moved to Boston to partner with classmate Samuel D. Warren; Warren & Brandeis opened in 1879. Within a few years their legal craftsmanship and social connections made the firm one of the most successful in New England. Brandeis offered his clients not only a brilliant legal mind, but sound and effective business advice, and by 1890, when the average income for lawyers was only $3,000 a year, Brandeis earned $50,000.

Brandeis defined modern notions of the individual right to privacy in a path-breaking article he published with his partner, Warren, in the Harvard Law Review of Dec. 15, 1890, on "The Right to Privacy." Stimulated by anger at offensive publicity concerning the social activities of Warren's family, it adumbrated a new legal concept that has had lasting influence. Building on diverse analogies in the law of defamation, of literary property, and of eavesdropping, Brandeis argued that the central, if unarticulated, interest protected in these fields was an interest in personal integrity, "the right to be let alone," that ought to be secured against invasion except for some compelling reason of public welfare.

His social conscience made Brandeis a leader of the Progressive Movement. From 1897 to 1916, he was in the thick of multiple reform crusades. He fought in Boston to secure honest traction franchises and in 1907 launched a six-year fight to prevent banker J. P. Morgan from monopolizing New England's railroads. After an expose of insurance fraud in 1906, he devised the Massachusetts plan to protect small wage-earners through savings bank life insurance. He supported the conservation movement and in 1910 emerged as the chief figure in the Pinchot-Ballinger investigation.

During this flurry of reform, two central themes emerged in Brandeis' social philosophy. First, the law had to be responsive to changing social conditions and, while protecting individual and corporate rights, had to be flexible enough to permit governments to devise measures for the welfare and safety of their citizens.

Widely known as "the people's attorney," Brandeis pioneered pro bono work and was a true reformer. Brandeis was also the first to cite law reviews both in his briefs before the court and in his opinions as a justice. In 1907, he introduced a new type of legal document, the "Brandeis brief,", consisted of three pages of legal citations and over one hundred pages of citations to articles, government reports, and other references. It was packed full of social research and data to support a ten-hour limitation on women's working hours. Muller v. Oregon was the first decision by the Supreme Court admitting the need to examine the social conditions as well as the legal facts involved in a case. The second theme emphasized the need to regulate the economy so as to prevent the domination of both society and economy by enormous corporations. It was this idea that brought Brandeis to the attention of Democratic presidential nominee Woodrow Wilson in 1912, and together the two men developed the political program known as the "New Freedom."

Brandeis believed that big monopolies not only dominated industry, but undermined a democratic society. Political liberty demanded economic freedom, and each individual deserved the opportunity to make his mark in the world. To achieve this, big businesses had to be broken up, and rules enforced to guarantee fair competition. His book Other People's Money (1914) was a brilliant analysis of the influence of moneyed interests on the life of the average American. In 1913 and 1914, Brandeis was a key adviser to President Wilson in drafting and enacting the Federal Reserve Act, The Clayton Antitrust Act, and the Federal Trade Commission Act.

Brandeis was never religious, but after mediating strikes involving Jewish garment workers he became profoundly identified with his Jewish ethnic heritage and became committed to Zionism (that is, the creation of a national home in Palestine for all Jews from around the world). Brandeis, as of 1905, believed in total assimilation of Jews into American society, a position subsequently used by his opponents within the American Zionist movement to attack him personally. Brandeis moved 180 degrees from this position, believing by 1914 there was something separate and unique to the Jewish race, which was one of the reasons he wanted them to be relocated to The Promised Land, which was Palestine. He concluded that:

"Assimilation is national suicide". There must be a land "where the Jewish life may be naturally led, the Hebrew language spoken, and the Jewish spirit prevail," and that land was "our fathers' land" -- Palestine.[1]

With the outbreak of World War I in 1914, Brandeis turned his attention to the Jewish question. The headquarters of the World Zionist Organization was moved to the United States, and Brandeis became chairman of the operating committee and the central figure in the group. While favoring creation of a Jewish homeland, he also recognized that Jews had found freedom and opportunity in the United States and therefore urged that Palestine be considered a homeland only for those Jews who wanted to go there. Nonetheless, American Jews, because of their safety and prosperity, should help secure and build that homeland. From 1914 to 1919, Brandeis was instrumental in raising millions of dollars for relief of war-afflicted Jews. He secured President Wilson's support for the 1917 British Balfour Declaration, which promised a Jewish homeland (eventually Israel). In 1919 he broke on issues of structural organization and financial planning with Chaim Weizmann, the leader of European Zionism. Weizmann defeated Brandeis for power and in 1921 Brandeis resigned from the Zionist Organization of America, along with his closest associates Rabbi Stephen S. Wise, Judge Julian W. Mack and Felix Frankfurter. He remained active in philanthropy directed at Jews in Palestine. In the late 1930s he endorsed illegal immigration to Palestine in an effort to help European Jews escape genocide when Britain denied entry to more Jews.

Brandeis' friendship with Wilson had almost brought him into the cabinet in 1913 as Attorney General or Secretary of Commerce, but objections from conservative businessmen prevented that appointment. Brandeis was never a socialist but he had a reputation of favoring small business over big business, and cooperatives over small business. In January 1916, in a surprise move, Wilson nominated Brandeis to the Supreme Court. There was a national uproar over the appointment, with conservatives denouncing the move and a small group of anti-Semites bitterly predicting the end of the republic. One opponent explained that Brandeis "is of the material that makes good advocates, reformers and crusaders, but not good or safe judges."[2] Brandeis accepted the nomination as vindication of his progressive views and Zionist beliefs, for which he had been sharply criticized. Brandeis saw the appointment as an opportunity to bring law into line with modern life. Senate hearings dragged on for four months; Brandeis said nothing, but quietly mobilized a battery of friends who refuted the numerous but ill-founded allegations against him. Even so, his confirmation was in doubt until Wilson finally saw the issue as one that pitted the president against Congress for control of the voice of the people. The president threw himself into the contest, appealing to public opinion by telling the nation:

I have known him. I have tested him by seeking his advice upon some of the most difficult and perplexing public questions about which it was necessary for me to form a judgment. I have dealt with him in matters where nice questions of honor and fair play, as well as large questions of justice and public benefit, were involved. In every matter in which I have made test of his judgment and point of view I have received from him counsel singularly enlightening, singularly clear-sighted and judicial, and, above all, full of moral stimulation. He is a friend of all just men and a lover of the right; and he knows more than how to talk about the right—he knows how to set it forward in the face of his enemies.[3]

Wilson did not speak to judicial philosophy. More to the point, Wilson counted votes and found out what it would take to turn around every Democratic senator, one by one. The strategy worked; all but one of the Democrats stood solid and Wilson gained three Progressive Republicans, so that Brandeis was confirmed 47-22 on June 1, 1916.

Wilson continued to think of Brandeis as his personal advisor, and asked him to head a major diplomatic mission. Chief Justice Edward White vetoed the idea, saying the Court was too busy to allow such diversions. By 1918 Brandeis had become friends with Taft, and when Taft became chief justice in 1921, the firebrand liberal and traditional conservative managed to work well together.

Brandeis remained a friend of labor on the Court, but he proved much less radical than his opponents had feared. He upheld convictions for sedition during World War I, supported prohibition, and was best known for long, complex minority opinions that somewhat resembled his famous sociological briefs.

In his 23 years on the bench, Brandeis fought to protect individual liberties from encroachment by the state and to give states the right to protect the safety and welfare of their citizens. Although frequently in a minority, his dissenting opinions were later cited as correct interpretations.

Brandeis often teamed with Oliver Wendell Holmes to argue that in a democracy the right to criticize the government or to expound unpopular views could not be abridged. In Whitney v. California, he opposed state laws directed against socialist philosophies and reminded his colleagues that the founding fathers had not been afraid of new ideas. Like Holmes, Brandeis personally did not share the ideas of the radicals whose cases came before the Court, but to him democracy meant that all ideas, no matter how repugnant, could enjoy freedom of expression.

During the Great Depression, when the Court, dominated by economic conservatives dubbed the "Four Horsemen", time and again declared innovative government measures unconstitutional, Brandeis urged his colleagues to lay aside what he regarded as their prejudices. Brandeis returned to the political arena during the New Deal years, when, behind the scenes, he orchestrated the small-business ideology of supporters like Felix Frankfurter. He kept his own values intact and generally supported the New Deal, voting against it only three times, most notably overthrowing the NRA, which violated Brandeis' hatred of what he called the "curse of bigness."[4]

Behind the scenes Brandeis was a major advisor to President Franklin D. Roosevelt and a group of New Dealers, led by his protege Felix Frankfurter, who had a specific reform agenda, such as opposition to big business, support for wages and hours legislation, and support for labor unions. He helped design the Securities and Exchange Commission, which remains one of the two most important surviving New Deal agencies in the 21st century. Whenever a possible conflict of interest arose, Brandeis would recuse himself from a Court decision.

Brandeis was one of the greatest legal craftsman ever to sit on the Court. One of his enduring contributions was the view that cases must be decided on the basis not only of legal precedents but also of social needs.

See the more detailed guide on the Bibliography subpage