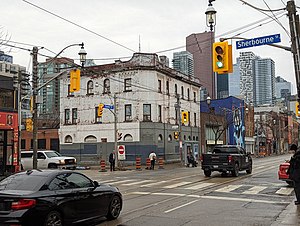 The corner of the Kormann House that faces the intersection has a distinctive notch cut out of it.

The Kormann Hotel was a 3 storey brick building built on the southwest corner of Sherbourne and Queen streets. It was built in 1897, and was considered luxurious, when built.

By the 21st Century the building had been abandoned, and was considered an eyesore.[1][2] The Globe and Mail wrote that, due to "crime and prostitution" the intersection where it was located was considered one of the least desirable in the city.