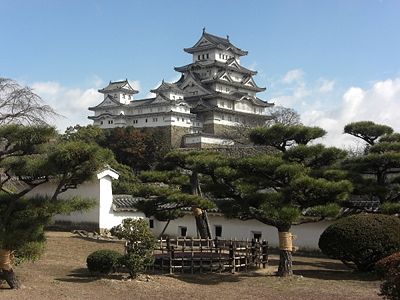 Sixteenth-century Himeji Castle is a UNESCO World Heritage site. In the foreground is one of 33 wells. This photo was taken before major renovation work began at the castle, due to finish in 2015.

Himeji Castle (姫路城 Himeji-joo) or White Heron Castle (白鷺城 Shirasagi-joo) is a sixteenth-century fortification looming over the city of Himeji in Japan. It is notable for being made of wood rather than stone, and for its maze of pathways designed to confuse invaders. The castle comprises 83 buildings, and also includes 33 wells in its grounds - one of which attracts many visitors with a ghostly tale of murder and haunting.

The 'White Heron' name comes from the white plaster which was used to fireproof the buildings.[1] These survived both the feudal period of Japan and the bombing of the country during World War II; one of the reasons that Himeji Castle is today a UNESCO World Heritage site is because the castle is unusually well-preserved.

Previously, a fourteenth-century fort stood on the site, but the modern castle was started by Hideyoshi Toyotomi (豊臣秀吉 Toyotomi Hideyoshi) in 1581. Toyotomi built a three-level structure; later, a five-level building was completed, with gaps in the walls that allowed the castle's defenders to shoot at attackers.

Himeji Castle is undergoing extensive renovation work until 2015, with most of the exterior covered by scaffolding. However, access to some parts of the castle is still possible, and visitors during this time only can also see the exterior close-up via a specially-constructed viewing platform.