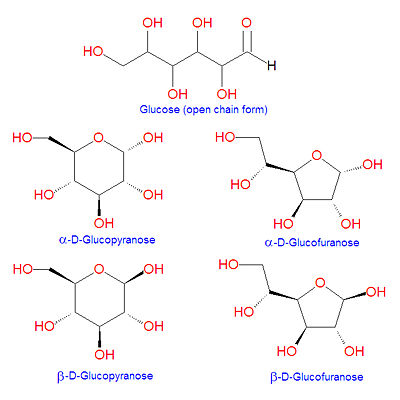 Glucose is a hexose sugar molecule present in living organisms. It is the main form of energy in a cell, and the first step of glycolysis is the transformation of glucose to glucose-6-phosphate. Glucose is also the precursor or the major antioxidant and enzyme cofactor, vitamin C, in most animals (except humans, great apes and a few other species). It is a component of the disaccharides sucrose, galactose and maltose, to name a few. Because it contains an aldehyde in the open chain structure, it is one of the aldose sugars. Glucose can cyclize to form five- and six-atom ring structures called glucofuranose and glucopyranose, respectively, as shown in the illustration. In 1891, the German chemist Emil Fischer elucidated the structure of D-glucose.

Glucose can undergo intramolecular reactions in which the aldehyde carbon at position C-1 is subject to nucleophilic attack by either the C-4 or C-5 hydroxyl groups to form cyclic hemiacetal structures called glucofuranose or glucopyranose, respectively. Depending on the stereochemical orientation of the resulting C-1 hydroxyl group formed in this reaction, the products are labeled as alpha or beta (see illustration).