Difference between revisions of "Fireboat" 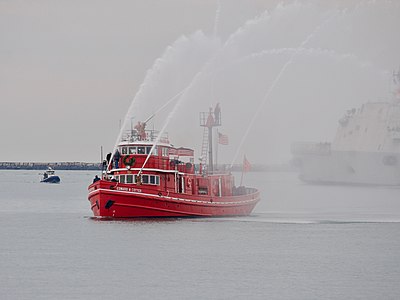 Fireboat Edward M Cotter showing off the use of its water cannon in 2017 near Buffalo, New York

A fireboat is a special-purpose boat designed to fight fires. Fireboats use their water cannons to fight fires on other vessels or on docks, bridges and waterfront warehouses. Medium and large fireboats are generally equipped with manifold where land-based fire engines can attach their hoses, so their pumps can supply water when a disaster has been serious enough to rupture a fire department's underground fire mains. Many larger or older fireboats were equipped with fittings that would allow shore-based firefighters to attach hoses, in the event a disaster, like a bomb or an earthquake, had damaged nearby underground fire mains.

Most commonly, fireboats are found in seaports and riverports. Originally, they fought fires solely with powerful water cannons. In the 20th century, they began to mix their water with additives to make them more effective. Additives included agents to generate foam, make the water sticky, or change its viscosity so it could be thrown farther. Fireboats may be dispatched to fight fires on land, when doing so allows firefighters to reach areas not accessible from surrounding roads.

In the late 19th century and early 20th century, all fireboats were powered by steam, and their engine room crew needed to be trained mariners. Later in the 20th century the use of internal combustion engines reduced the purely nautical skills crew required. Late in the 20th century shipyards started to build smaller fireboats which required maritime skills comparable to those required for pleasurecraft.

Some early fireboats were equipped with rams, so that they could ram and sink vessels that were aflame, before they collided with other vessels and set them ablaze as well.

In recent decades it has been possible to construct relatively powerful smaller fireboats using propulsion systems similar to high-end recreational craft, that do not require mariners. While the smaller fireboats enabled by newer technology made owning an operating a fireboat more affordable for smaller municipalities, many ports had less requirement for fireboats, since docks and shoreside warehouses were built of less flamable material than the woods often used in the past.

On September 11, 2001, the collapse of the World Trade Center towers (after the Al Qaeda attacks) ruptured nearby fire mains, and New York Fire Department firefighters relied on the pumps of their fireboats to supply water pressure. Following those attacks, the United States Federal Emergency Management Agency began giving American cities grants to pay for, or partially subsidize, the purchase of new fireboats, provided those fireboats were also equipped to help in the case of attacks from nuclear weapons, chemical weapons, germ warfare, or spills from toxic chemicals. Typically, FEMA-sponsored fireboats have sealed cabs to protect the crew from fallout, nerve gas, biowar, or chemical spills. They may also be equipped with infrared or other sensors that permit the crew to operate in heavy smoke, fog, or gas attack. The infrared sensors are also very useful in using heat signatures to find people who have jumped into the water, or fallen overboard.