From Citizendium
Revision as of 11:58, 10 January 2011 by imported>Milton Beychok (Replaced photo with another one)
(diff) ← Older revision | Latest revision (diff) | Newer revision → (diff)
Jump to navigation Jump to search

The Federal Environment Agency of Germany was founded in 1974 and is the central federal authority for environmental matters in Germany. The agency is commonly referred to as the UBA, an acronym for its German language name of Umweltbundesamt.

The Federal Environment Agency is part of Germany's Federal Ministry for the Environment, Nature Conservation and Nuclear Safety (Bundesministerium für Umwelt, Naturschutz und Reaktorsicherheit, referred to as the BMU) and is responsible for protecting the environment as well as human health and well-being from adverse environmental impacts. Its key mandates are:[1]

The UBA is headquartered in the city of Dessau and also has offices in the cities of Berlin, Langen, and Bad Elster as well as monitoring stations at seven other locations nationwide. As of 2009, the agency had a total staff of about 1,400 working at 13 locations and an annual budget of about €100,000,000. About 800 of the total staff work in the Dessau headquarters.[2][3]

The UBA's organization chart is summarized below. The agency is governed by the Office of the President consisting of a President and a Vice-President, assisted by a Council of Environmental Advisors, an Internal Audit and Corruption Prevention Unit, a Press Officer and other functional entities.

As shown in the chart below, there are four operational groups (Division I, II, III and IV), an administrative management and services group (Division Z) and a special group for air pollution emissions trading (Division E). Most of the functions depicted in the chart are located in the headquarters site in Dessau, but some are in Berlin and the other locations (Langen and Bad Elster). 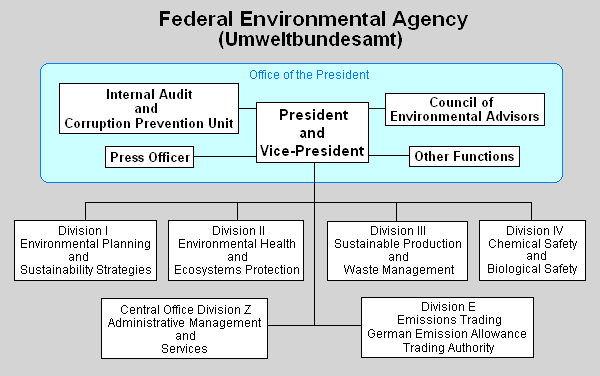 The major tasks and issues for which the UBA is responsible may be summarized as:[2]

Air pollution in Germany has markedly decreased in the last 20 years. Through the introduction of flue gas clean-up systems in power plants and industrial installations; and the use of modern catalysts and fuels, considerably fewer pollutants are today released into the atmosphere. Air quality limit values for sulfur dioxide, carbon monoxide, benzene and lead set by the European Union are no longer exceeded in Germany.[5]

The basic air pollution control regulation in Germany is entitled "Technical Instructions on Air Quality Control" (Technische Anleitung zur Reinhaltung der Luft) and commonly referred to as the TA Luft.[6] The first version of the TA Luft was enacted in 1964 by the West Germany Parliament.[7][8]

Ten year later, the West Germany Parliament enacted the Federal Air Pollution Control Act (Bundes-Immissionsschutzgesetz), referred to as the BImSchG,[9] which included a revised version of TA Luft. In 1983, the TA Luft was revised and in 1984 the BImSchG was also revised. The TA Luft was again revised in 1986 to include requirements for the use of the Best Available Technology (BAT). In 2002, the BImSchG and the TA Luft were further revised. The BImSchG is now the primary law for air pollution control in Germany.[8]

Although the Federal Environment Agency and the TA Luft are both under the jurisdiction of the Federal Ministry for the Environment, Nature Conservation and Nuclear Safety, it is not clear whether the agency has any responsibility for updating the TA Luft.