Enrico Fermi (1901-1954) was an Italian-born nuclear physicist and designer of the first nuclear reactor. 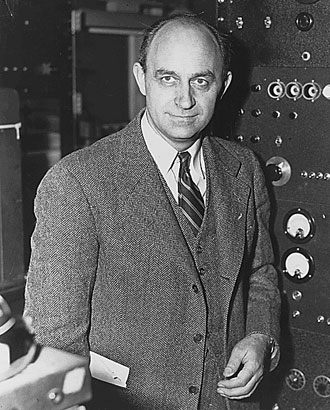 Fermi was a very broadly oriented physicist; in fact he was one of the last physicists who made important contributions to theoretical as well as to experimental physics. As a theoretician, he contributed decisively to quantum mechanics: Fermi-Dirac statistics, the interaction between matter and electromagnetic fields, and the theory of beta decay. As an experimentalist, he introduced the technique of neutron bombardment to study artificial radioactivity, opening the way to the discovery of nuclear fission. In the 1930s he established a famous school of nuclear physics in Rome. During the war he worked on nuclear reactors and was an important adviser of the Los Alamos Laboratory. As a professor at the University of Chicago, he inaugurated shortly after the war an important research program in particle physics centered on a new 450 MeV synchrocyclotron.

Enrico was born in Rome on September 29, 1901 as a son of Alberto Fermi, an administrative employee of the Italian railroads, and Ida de Gattis, a former school teacher. Fermi studied physics at the University of Pisa, as a fellow of the prestigious Scuola Normale Superiore. Not many good physicists were then among the staff of the University; in essence Fermi studied alone. The books he found in the library were his teachers. As witnessed by Fermi's friend Enrico Persico, after a while Fermi was considered the supreme authority on relativity and quantum theory at the University of Pisa.

Soon after his graduation in 1922, the influential director of the Physics Institute of Rome University, Orso Mario Corbino, a former Minister of National Education and eventually (1923-1924) Minister of National Economy, realized his promise and promoted his career. On Corbino's advise Fermi pursued his studies in Göttingen (1923), where he did not make many scientific contacts, and Leiden (1924), where he had a rewarding time. Ehrenfest, the Leiden professor of theoretical physics, recognized the genius of Fermi and greatly encouraged him.

In 1926 Corbino's influence obtained him a chair of theoretical physics in the institute in Rome (the first in Italy; the second theoretical physics professorship, in Florence, went to Enrico Persico). That year Fermi published a seminal paper on the quantization of the monatomic ideal gas, proposing a new quantum statistics for particles with half-integral spin (fermions).

With Corbino's support, Fermi set up a research group in nuclear physics that included Edoardo Amaldi, Franco Rasetti, Emilio Segrè, Oscar D'Agostino, Bruno Pontecorvo, and Ettore Majorana. The group gained world-wide renown by their work on the then-new phenomenon of artificial radioactivity obtained by means of neutron bombardment of chemical elements. Between March and July 1934, they discovered (that is, prepared and detected) about fifty new radioactive isotopes. A few of these, which they misinterpreted as transuranic elements, turned out to be fission products of uranium, as Otto Hahn and Fritz Strassmann discovered four years later.

Also in 1934, Fermi found that neutrons slowed down in passing through light elements and that, when suitably retarded, they became extremely effective in provoking nuclear transmutations. No less important was Fermi's theoretical analysis of nuclear beta decay (1934), which stimulated further study of weak interactions. The Fermi group itself soon decayed. Most members left Rome and Corbino died in January 1937, thereby depriving Fermi of important institutional support.

The fascist racial, anti-Jewish, legislation of 1938 hit Fermi's Jewish wife, Laura Capon, and political boycott added to scientific frustration. About that time Fermi decided to escape fascist Italy. The great Danish physicist Niels Bohr told Fermi in the fall of 1938 that he would most probably win that year's Nobel Prize for his neutron work. It was an unprecedented but purposeful breach of confidence dictated by the exceptional political circumstances of that time. Bohr's forewarning enabled Fermi and his family (wife, daughter, and son) to make plans to flee Italy. After Fermi indeed won the Prize, he and his family traveled to Stockholm in December 1938 for the acceptance ceremony. Thereupon they sailed from Sweden to New York without returning first to Italy and without informing the Italian, fascist, authorities about their move. The Fermi family settled in the United States, where Fermi received a professorship at Columbia University in New York. Fermi and his family became U.S. citizens in 1944.

Early 1942 he moved to the University of Chicago, where he was soon joined by Edward Teller, to work in the Manhattan Project, the US atomic-bomb program. Fermi led the construction of the first nuclear reactor, which went critical on 2 December, demonstrating the chain reaction and the feasibility of producing plutonium for an atomic bomb. He collaborated with the Los Alamos teams involved in the construction of the bomb and attended the Trinity Test in Alamogordo, New Mexico, on 16 July 1945.

After the war Fermi served on the Atomic Energy Commission's General Advisory Committee, contributing to the definition of American nuclear strategy and research policy. He also spent time in Los Alamos in 1950 to work on the H-bomb program launched by President Harry Truman after the Soviets had exploded their first atomic bomb in August 1949. But Fermi's main base was the University of Chicago, where he led an important research program in particle physics using a 450 MeV synchrocyclotron. His team studied pion-nucleon interactions (1952-1953), confirming the conservation law of isotopic spin in strong interactions and observing the first pion-nucleon resonance.

Fermi's name is honored in the unit of length for nuclear dimensions (the fermi, 10−13 cm), in the transuranic element of atomic number 100 (fermium), in a class of elementary particles (fermions), in a rule for transition probabilities (Fermi's golden rule), and in one of the most important particle physics laboratories in the world (Fermi laboratory, near Chicago).

In 1952 Fermi was elected president of the American Physical Society. He had to cope with the drama unleashed in the American scientific community by the anti-communist campaign of Senator Joseph McCarthy and the ensuing trial of J. Robert Oppenheimer before the Atomic Energy Commission's Security Board. He testified in April 1954 in support of the former scientific leader of Los Alamos. In the summer of 1954, Fermi fell ill with stomach cancer. After useless surgery, he died in Chicago on 29 November.