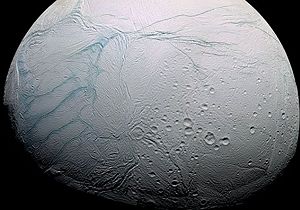 Enceladus, one of Saturn's many moons, could be volcanically active and possibly home to other life.

Enceladus[1] is the sixth-largest moon of Saturn. It was discovered in 1789 by William Herschel. It was named after one of the giants of Greek mythology. The moon is notable as a candidate for harbouring extra-terrestrial life.

It has recently been suggested that Enceladus might be volcanically active - this could explain the icy geysers in its southern region, first observed in 2005 by the Cassini probe. If it is true that the little moon is spewing water into space,[2] Enceladus would be added to the growing list of places in the solar system that might be home to some form of life. To try to resolve these matters, Cassini set course for a return visit to Enceladus, arriving in March 2008.[3] The probe identified organic chemicals, water vapour and higher temperatures than expected in the fissures of the south polar region, and added more evidence that Enceladus may harbour liquid water beneath the surface.[4]