In SI units the proportionality is,

where ε0 is the electric constant and εr is the relative permittivity of the dielectric. In Gaussian units ε0 does not occur and can be put equal to unity in this equation. In vacuum the dimensionless quantity εr = 1 (both for SI and Gaussian units) and D is simply related (SI), or equal (Gaussian), to E. Often D is termed an auxiliary field with E the principal field.

An other auxiliary field is the electric polarization P of the dielectric,

The electric displacement appears in the following macroscopic Maxwell equation (in SI),

where the symbol ∇⋅ gives the divergence of D(r) and ρ(r) is the charge density (charge per volume) at the point r. 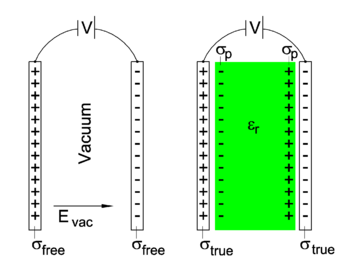 CC Image
Two capacitors at same static voltage difference V. On the left vacuum between the plates and on the right a dielectric with relative permittivity εr. Absolute values of surface charge densities are indicated by σ.

In the special case of a parallel-plate capacitor, often used to study and exemplify problems in electrostatics, the electric displacement D has an interesting interpretation. In that case D (the magnitude of vector D) is equal to the true surface charge density  σtrue   (the surface density on the plates of the right-hand capacitor in the figure).[1] In this figure two parallel-plate capacitors are shown that are identical, except for the matter between the plates: on the left no matter (vacuum), on the right a dielectric. Note in particular that the plates are held at the same voltage difference V and have the same area A. When the capacitor on the right discharges, it will deliver the total charge Qtrue = A⋅σtrue. The one on the left will produce Qfree = A⋅σfree.

where we used again that the charge Q is A⋅σ. Clearly, the charge density on the plates increases by a factor εr when the dielectric is inserted in-between the plates. This means that the external source (of voltage V) must deliver a current during this insertion (it must move negative charge—electrons—from the positive plate to the negative plate).

(Here the minus sign appears because the polarization charge density σp is negative on the positive side of the capacitor).

Assuming that the plates are very much larger than the distance between the plates, we may apply the following formula for Evac (the magnitude of the vector Evac),

hence D depends only on the charge delivered upon discharge, D = Qtrue / A.

It is of some interest to note that the polarization vector P (pointing from minus to plus polarization charges, i.e., parallel to Evac) has magnitude P equal to the polarization surface charge density σp. Indeed, the magnitudes of the three parallel vectors are related by (in SI units),

As defined above, D and E are parallel, i.e., εr is a number (a scalar). For a non-isotropic dielectric εr may be a second rank tensor,

so that D and E are not necessarily parallel in non-isotropic dielectrics.