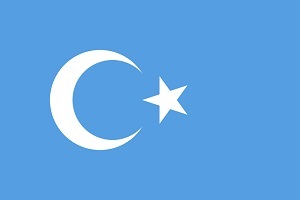 The Kök Bayraq (Blue Banner), was adopted by the Republic of East Turkestan on 12 November 1933.

An independent Republic of East Turkestan briefly existed prior to the invasion and assumption of control of the area by the People's Liberation Army in 1949. In recent years, the region has experienced violently suppressed anti-government demonstrations and an active separatist East Turkestan Independence Movement, which the Chinese administration has classified as a terrorist organization.