From Citizendium
Revision as of 15:33, 12 January 2011 by imported>Mary Ash (Removed the comma and added the forgotten "is". Just missed seeing it. Thanks Ro!)
(diff) ← Older revision | Latest revision (diff) | Newer revision → (diff)
Jump to navigation Jump to search 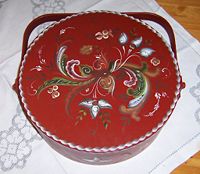 (CC) Image: Erik A. Drabløs
Rosemaling is a form of Norwegian decorative art.

The term decorative arts is used to apply to decorative items created by artisans and skilled craftsmen. The term was coined to distinguish a range of man-made ornamental items from works defined as the Fine Arts, such as painting. Art historians often use the term minor arts to refer to decorative arts.

The designation is tricky because, like design, these culturally based notions are fluid and change over time. Determining exactly what categories different works of art fit into is likewise challenging. Glass and treen are generally utilitarian, but better examples are often described as decorative arts, although that title implies that which is decorative rather than functional. Grand sculpture is traditionally considered a fine art, but modern sculptures (that is, post industrial as opposed to contemporary) are generally considered decorative arts. Some people categorise sculpture based on size, but that definition is not hard-and-fast, as even very large contemporary sculptures would be considered items of decorative art or just called modern design, while small metal sculptures such as bronzes, created by the western masters, are still considered fine art.

Another consideration is the level of craftsmanship. While consummate skill is generally considered one determinant of a decorative art, antiquities may be exempt from this criterion, since some ancient artifacts are roughly crafted, but by virtue of their significance in human development and comparative rarity, may now be considered decorative arts.