Difference between revisions of "Crossword"

A crossword is a kind of word game which involves entering words into a grid so that they fit together. It was invented by Arthur Wynne in 1913 when it first appeared in the New York World.[1] Cryptic crosswords differ from normal crosswords as the clues only indirectly lead you to the answers; for example, 'Businessman burst into tears (9)' appears difficult at first, but when you see 'burst' as indicating that 'into tears' should be anagrammed, with businessman as the definition, it cracks open as you see that 'into tears' is an anagram of 'stationer', the answer.[2]

A UK style crossword, compared to... 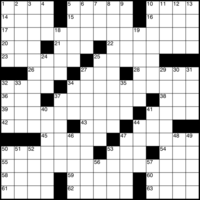